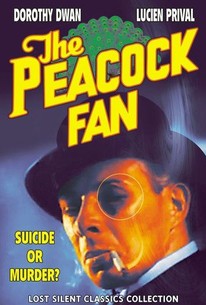 Several of Hollywood's best Chinese actors are prominently featured in the mystery melodrama Peacock Fan. The titular prop is a priceless Chinese artifact, which has brought tragedy to all of its owners. When the latest possessor of the precious fan is murdered, half-caste detective Chang Dorfman (Lucien Prival) launches an investigation. Also involved in the case is police sergeant O'Brien (Tom O'Brien), who is briefly diverted by the charming and mysterious Feliti (Lotus Long). Peacock Fan was produced by Chesterfield Pictures, a specialist in this sort of atmospheric exotica.

There are no critic reviews yet for Peacock Fan. Keep checking Rotten Tomatoes for updates!

There are no featured reviews for Peacock Fan at this time.