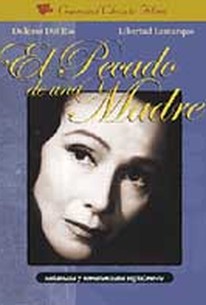 The unbeatable combination of both Dolores del Rio and Libertad Lamarque co-starring in this three-hanky melodrama about the self-sacrificing love of a mother makes this otherwise unexceptional film a people's favorite. Lamarque plays the mistress of a married man and del Rio has the role of his wife. After the husband dies in an auto accident, the mistress survives the crash and later gives birth to their son. The grieving widow agrees to adopt the boy as her own -- on the condition that the mistress bow out of the picture completely. She agrees and so it is settled, until many years later when the repenting birth mother wants to get to know her now-grown offspring. ~ Eleanor Mannikka, Rovi

There are no critic reviews yet for Pecado de una Madre. Keep checking Rotten Tomatoes for updates!

There are no featured reviews for Pecado de una Madre at this time.