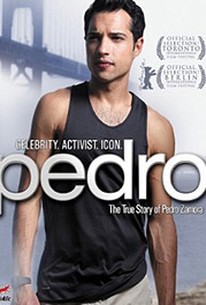 "Pedro" celebrates the extraordinary life of Pedro Zamora, a young man who when he found out he was HIV positive at 17, made the courageous decision to dedicate the rest of his life to speaking out about his condition in an attempt to raise awareness about the disease in his community, even testifying before the United States Congress to argue for more explicit HIV/AIDS educational programs aimed at youth of color before auditioning for "The Real World" in 1993. His appearance on "The Real World" brought his story and his message to MTV's youthful audience and beyond, and when Zamora's health began to deteriorate in late 1994 (after he left the show), it became front page news nationwide, and his death at age 22 provoked a worldwide outpouring of grief.

This true life tale isn't a very good film and the script offers nothing new to the biopic genre.

Pedro's life and legacy deserve a tribute, but one that's more consistently strong.

Lacks the polish, star power or distinct voice of brother-in-arms Milk, but pays earnest tribute to a man who shattered preconceptions about gays and people with AIDS.

I remember watching this unfold back in 1994...learning about the hiv status, and having it exposed on national tv. I thought it took a lot of guts, and for that Pedro deserves alot of respect. This film was a nice tribute to him. Very interesting, and well done.