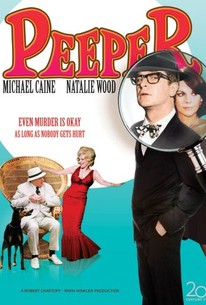 In this comedy drama that spoofs detective pictures from the 1940s, Tucker (Michael Caine) is a private eye hired by Anglich (Michael Constantine), a wealthy man who is trying to find the whereabouts of his long lost daughter. Tucker's sleuthing leads him to Ellen (Natalie Wood) and Mianne (Kitty Winn), two members of the decidedly unusual Prendergast Family. So far as Tucker can tell, either Ellen or Mianne is Anglich's missing child, but he's not quite sure which. The supporting cast includes Timothy Carey, Thayer David, Liam Dunn, and Liz Renay; Humphrey Bogart impersonator Jerry Lacy appears in the opening credits. ~ Mark Deming, Rovi

Margo Winkler
as Lady with luggage

Guy Marks
as Man In Alley

Buffy Dee
as Bazooka Himself

Paul Jabara
as Janitor
View All

The film's original title was "Fat Chance," which should have furnished the producers warning enough of its flop potential.

"Peeper" is one of the funniest of the year.

To put it bluntly, "Peeper" is a nothing picture.

Wood makes a distinctly un-fatale contribution, and Caine looks totally miscast as a Cockney private eye in California; even Segal and Audran, so disappointing in The Black Bird, outclass them.

The... fun is rather limited, mainly because W.D. Richter's script is too pedestrian to allow for bristling, or even sparkling comedy.

The dialogue is too cute and the direction by Peter Hyams fails to give the film the light touch it needs.

Director Peter Hyam has a knack for just missing the boat.

I saw this a long time ago, and I really want to see it again, I remember it being really funny. Caine can be a great comedy actor in some movies, and this is one of them.