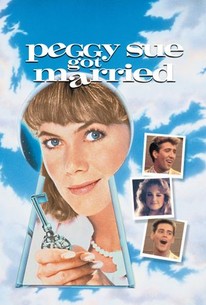 Critics Consensus: Peggy Sue Got Married may seem just another in a line of '80s boomer nostalgia films, but none of the others have Kathleen Turner keen lead performance.

Critics Consensus: Peggy Sue Got Married may seem just another in a line of '80s boomer nostalgia films, but none of the others have Kathleen Turner keen lead performance.

Critic Consensus: Peggy Sue Got Married may seem just another in a line of '80s boomer nostalgia films, but none of the others have Kathleen Turner keen lead performance.

During her 25th high school class reunion, middle-aged Peggy Sue (Kathleen Turner) tries to forget her marital problems with husband Charlie (Nicolas Cage) by renewing old friendships. Wondering if she made the right decisions in her life, Peggy Sue gets a chance to try again when, zapped into a time warp, she finds herself a teenager back in 1960. Armed with foreknowledge (the scene in which she tells off her algebra teacher is a particular treat), Peggy Sue gets to retrace the steps leading up to her unhappy marriage to high-school sweetheart Charlie. Will nerdish Richard Norvik (Barry Miller), who always carried a torch for Peggy Sue and whom she knows will become a millionaire computer mogul by 1985, win out over the unreliable Charlie this time? A "small" film from the otherwise profligate Francis Ford Coppola, Peggy Sue Got Married possesses an irresistible charm that makes up for its glaring plot deficiencies. The youthful cast is matched in its appeal by such veterans as Leon Ames, Maureen O'Sullivan and John Carradine. And yes, that is Jim Carrey as Walter Getz.

This prom-night balloon of a movie floats easily above the year's other exercises in '50s nostalgia. If you dare reach for it, it will land smartly in your heart.

It's grave, lumbering, arrhythmic, and bloated, an emotional hogwallow of catchpenny insights and easy sentimentality.

What makes this treatment unique is that the jokes aren't so much derivative of pop culture, but are instead found in the learned wisdom of a middle-aged woman reacting to her own teenage dilemmas.

Ignore the ridiculous happy ending of this film, and you have a much more fatalistic exercise in which Coppola eschews easy laughs in favour of the exposure of feeling and the fact that these people's lives, however empty, matter to them.

Miss Turner's self-assured comic timing goes a long way toward salvaging the film, providing both moral and physical dimension to a role that scarcely exists.

It's a wistful fantasy, a bright reminiscence, a Stroll down memory lane that's as glowingly conceived as it is slightly flawed.

In arguably the most humanistic work of his career, Coppola forgoes the epic in favor of the personal.

Even if it falls apart a bit at the end, it is basically a well-crafted and entertaining film. But I cannot help but be distressed by the fact that... the female time-traveler is passive in and little enriched by her re-exploration of the past.

No masterpiece, but it at least imparts an important perspective about nostalgia.

The film often soars into the imaginary heavens of delight but then just as quickly sputters and crash lands due to Coppola's leaden helming.

A charming little comedy grounded in an irresistable performance from Kathleen Turner.

Rewatched it again and not overly impressed. Nicolas Cage makes a hammy bad joke of the romantic scenes and the ending was really f*d. Honestly I was hoping she would run off with Richard the whole time. Had potential and the fashions were great and done small roles with other stars were fun to see, but overall a bit of a fail.

A great romance. Kathleen Turner is always amazing & so is Nick Cage. The story itself is adorable. Definitely one to watch. A special gem of the 80s. I love it! :)

As you can see from the title, Peggy Sue got married, but she isn't happy with her marriage. In this time travel comedy she goes back in time to see just how she got where she is today. I really like this movie, the story is really cool, and the actors are great. I highly recommend it.

Erm. I think I was expecting more. Had some funny moments, but for a genre "comedy" it was far too sappy. Although Nicolas Cage's ridiculous voice was an interesting point, but hardly a selling point. I dunno, I was expecting many more laughs and a lot less love-loss, love stuff. Bleh. Don't need to watch it again... It also kinda lagged a lot in the middle. A lot a lot.