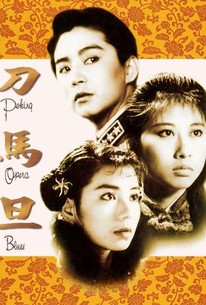 This slapstick comedy drama stars three of Hong Kong's most attractive and popular actresses of their time: Brigitte Lin is the daughter of a general, Cherie Chung is a petty thief, and Sally Yip is the daughter of the manager of the Beijing Opera theater. The story is set in 1911 when the Chinese revolution overthrew the monarchy and established a republic. The general's daughter has to steal an important document from her father's safe in order to help out the guerrillas who are fighting for the republic. Her exploits and those of her two friends flow back and forth between the Imperial Palace and the theater of the Beijing Opera. Action, farce, and political satire tumble over each other as the story leads up to its dizzying rooftop climax.

There are no critic reviews yet for Peking Opera Blues. Keep checking Rotten Tomatoes for updates!

Comedy, action, political intrigue and what not. One of Tsui Hark's best, they really don't make them like they use to.

It's astonishing combination of high-flying acrobatics, hilarious comedy, excruciating torture scenes, and unabashed heroism from powerful female characters is like watching one of the old-style martial arts movies through a kaleidoscope.