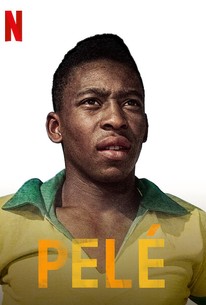 This documentary feature tells the story of iconic footballer Pelé, his quest for perfection and the mythical status he attained. As well as unprecedented interview access to Pelé, the film includes astounding archive footage and interviews with legendary former team-mates including Zagallo, Jairzinho and Rivellino. The story looks back at the extraordinary 12-year period in which Pelé, the only man to win three World Cup titles, went from young superstar in 1958 to national hero in 1970; a radical yet turbulent era in Brazil's history.

Nicholas and Tryhorn's new film for Netflix, though plenty laudatory, presents a contemplative Pelé that appears human after all

A fitting tribute to both the man and the myth, unwilling to turn a blind eye to his shortcomings and yet perceptive enough to recognize that his failings were secondary to his athletic brilliance.

Why the filmmakers couldn't get any vivd recollections out of Pelé, sitting in front of them, is anyone's guess.

Pelé is a terrific examination of the player, the man, and his status in recent Brazilian history.

Watching a film celebrating an athlete who... gave cover to a brutal dictatorship feels unsettling, even if that film goes after the question about... his responsibility

Do I wish that "Pele" had gone a little deeper? Yes...winning those three championships (still the only man to do it) - it was superhuman. Had we been able to get more of the merely human Pele, this documentary might have reached a greatness of its own.

As it paints an honest portrait of the complex relationship between sports and politics in Brazil, Pelé suggests that the star transcended both.

You'll be hard-pressed to find a subject as enthralling, human, or intrinsically linked to their culture and country as Pelé, and this documentary is a fitting tribute to that legacy.

[Pelé's] story isn't as compellingly told as it could be and directors Ben Nicholas and David Tryhorn's efforts to examine the political turmoil of the era doesn't quite come off.

There are no featured reviews for Pelé at this time.