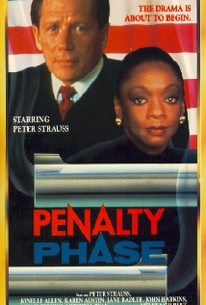 Tony Richardson, who in his days of prominence directed the Oscar-winning Tom Jones (1963), demonstrated in 1986's Penalty Phase that the intervening years did not dim his talent in the least. Peter Strauss stars as a liberal judge, in the midst of a re-election campaign. Strauss has been under fire from his enemies for being too soft on criminals. He intends to prove otherwise while presiding over the case of a vicious mass murderer and rapist (Richard Chaves). Shortly after a guilty verdict is reached, Strauss is tipped off anonymously that the defendant right's may have been violated during interrogation. While the jury enters "the penalty phase" wherein they must decide on proper punishment, Strauss undergoes a profound moral dilemma: Should he honor the letter of the law, thereby incurring public wrath and losing all hopes for being re-elected? Scripted by former lawyer Gail Patrick Hickman, the made-for-TV Penalty Phase was originally telecast November 18, 1986.

There are no critic reviews yet for Penalty Phase. Keep checking Rotten Tomatoes for updates!

There are no featured reviews for Penalty Phase at this time.