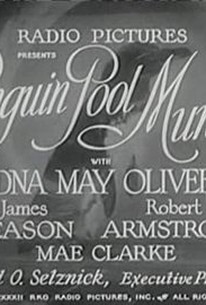 Edna May Oliver makes the first of three appearances as Hildegarde Withers, the schoolteacher/sleuth created by mystery writer Stuart Palmer. While conducting her students on a tour of the Battery Park Aquarium, Hildegarde spots a dead body in the penguin pool. Police inspector Piper (James Gleason) believes it's an open-and-shut case when he collars the faithless wife (Mae Clarke) of the victim, but Hildegarde suspects there's more to the case than meets the eye. Detective and teacher mellow from antagonists to friends in the course of the investigation, the denouement of which isn't revealed until the suspect is put on trial, where she is defended by her attorney-lover (Robert Armstrong). The murderer's identity isn't too surprising, but Penguin Pool Murder takes several unexpected twists all the same, including a neat reversal on the old "reunited lovers" finale. At the end, Hildegarde and Piper are contemplating marriage, but in the subsequent Edna May Oliver/James Gleason "Hildegarde Withers" films (Murder on the Blackboard, Murder on a Honeymoon) they retain their single status.

Clarence Wilson
as Bertrand B. Hemingway

Wilfred North
as Judge
View All

The mystery that follows is good enough without being particularly dazzling, but that's less the selling point than the clever characters, the unusual leads, and the bright dialogue.

There are no featured audience reviews yet. Click the link below to see what others say about Penguin Pool Murder!