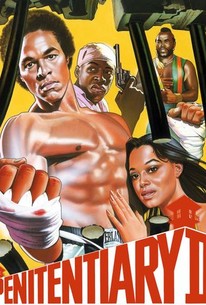 A former prison inmate finds he can't leave his violent past behind in this sequel to the cult favorite Penitentiary. After earning his parole by winning the prison boxing tournament, Martel "Too Sweet" Gordone is tired of fighting and wants to move on to a more peaceful life, but as a condition of his release, he has to work for Handler Cunningham, a boxing promoter who also runs a gym in Los Angeles. Too Short isn't interested in boxing, and would rather stay with his sister, Ellen (Peggy Blow), and her husband, Charles (Glynn Turman), both successful lawyers who support him in his desire to start his life over. But things take an unexpected turn when Half Dead (Ernie Hudson), Too Sweet's nemesis from prison, escapes with the help of his cronies Do Dirty (Cepheus Jaxon) and Simp (Marvin Jones), and they murder Clarisse (Eugenia Wright), Too Sweet's girlfriend. In order to get justice, Too Sweet returns to the ring, and with the help of a new trainer (Mr. T) and the management expertise of his brother-in-law, Too Sweet is on the road to the championship -- but can he get the big fight before Half Dead finds him? Penitentiary II features cameo appearances from boxing legend Archie Moore, Dolemite star Rudy Ray Moore, and Tony Cox. ~ Mark Deming, Rovi

Ernie Hudson
as Half Dead

Mr. T
as Himself

Cepheus Jaxon
as Do Dirty

Donovan Womack
as Jesse `The Bull'

There are no critic reviews yet for Penitentiary 2. Keep checking Rotten Tomatoes for updates!

There are no featured audience reviews yet. Click the link below to see what others say about Penitentiary 2!