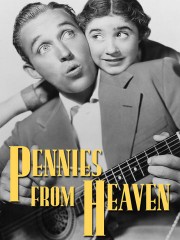 I enjoyed watching this movie. It is filled with great music, serious issues, and comedy.

This film ask how to support yourself or a family when there is no plan and how to make a way when one is desperate.

I think one of the things that interesting was that this film goes into a lot of different environments and jobs to be able to keep the audiences attention such as a jail, a restaurant, an orphanage, and more.

I found the Louis Armstrong and Bing Crosby parts to this film very good. I was kept fully engaged when either one was on screen during this film. Bing Crosby does a lot from doing very little such as body or facial expressions to tell a lot.

They try to put the girl in an orphanage in most of the film just to get to the end of the film where the orphanage does not desire to have her because she causes more trouble than she is worth to support.

I loved the ending because it ends in an unexpected slap stick ending.

Joel A
½ April 15, 2015
A charming & sentimental film about a gifted musician/drifter who delivers a letter to a family from a man of death row.

Although Drifter (Bing Cosby) has his heart set on performing music in Venice but gets a little distracted on the way.

Kevin S
May 13, 2014
This kinda short but very good classic is about a condemned prisoner who gives a message to a fellow prisoner to give to a family. This family is a little girl and her grandpa who just got evicted from their home. The prisoner gives his house in new jersey to the family and the guy giving them the message goes along with them who he also befriends the little girl. There's an women working for an agency after them too that wants to make sure the girl is properly taken care of so to ensure her that they can they turn the house into "the haunted Cafe" because the house has a history of being haunted. The plot, the acting, and very much the singing from the great bing crosby made me enjoy this movie very much.very entertaining and so much fun with great songs and plenty of laughs. Even the great and talented Louis armstrong is in here doing what he does best. Its a short movie but within that hour and twenty minutes you will be very well entertained.

Stephanie D
½ December 16, 2013
Bing Crosby sings his way into a little girl's heart which is adorable and creepy all at the same time!

Michael T
May 9, 2013
Crosby introduces the title song in an otherwise predictable musical.

Super Reviewer
Aj V
½ September 15, 2010
This is a sweet movie, and I liked Crosby in it, but the other actors aren't so great. Plus, it's got a predictable romance. It could have been better.

Neil O
May 6, 2010
Delightful Bing Crosby film from the early part of his career, when he seemed to play in a succession of pictures that usually featured him as a sort of wandering troubadour with a carefree attitude to life and its responsibilities and where the songs were plentiful and there was always a girl or two to win over. The film doesn't out-stay its welcome in that and Bing sings about half a dozen numbers including the title song "Pennies from Heaven" and "One, Two, Button Your Shoe" and there's a good early opportunity to see the great Louis Armstrong.

bernard a
½ March 6, 2010
Can a film like PENNIES FROM HEAVEN be made nowadays without having someone so much as raise an eyebrow? I really doubt it. Just consider it's plot: an ex-con befriends a little girl. That in itself would cause alarms to ring right then and there. Not to mention the little girl introduces the ex-con to everyone, including her grandfather, as "Larry, my most intimate friend"!!! Cue NBC reporter Chris Hansen to make his dramatic entrance...!!!

I'm really just half-joking. PENNIES FROM HEAVEN is such an innocuous film from the depression era...escapist fare meant to showcase Bing Crosby's singing chops. Most everyone in it truly has a heart of gold that it's kind of hard to watch it with modern sensibilities - I guess what I mean is we are just too inured a society nowadays - what with child kidnappings and Megan's Law, to watch a film like PENNIES FROM HEAVEN without having the niggling "P" word irratating the back of your consciousness (that's "P" as in pedophilia). We just aren't as trusting a society (to strangers, especially) as we were in the 1930's (if you go by this movie.)

The ex-con here is Larry Poole (Bing Crosby)...that in itself is hard to believe (Bing Crosby as a con) but there he is in prison at the beginning of the film. He is handed a letter by a convicted murderer on his way to be executed. The murderer wants Larry to deliver the letter to the family of his victim. A means to atone for his crime. Larry promises the condemned man that he would find the family and deliver his letter. (I told you everyone in this flick is nice...even the murderer)!

When Larry gets out of prison...the first of the family members that he finds is Patricia (Edith Fellows)- the daughter of the murdered man. Patricia is now living on the streets with her grandfather (Donald Meek) after they have been kicked out of their house for non payment of rent. A concerned welfare worker, Susan Sprague (Madge Evans) is also trying to get Patricia into a children's institution because she thinks the grandfather cannot properly care for her. Patricia considers Susan a threat to break up her family and runs away every time she sees the social worker nearby.

But Larry brings good news in the form of the letter from the executed criminal who has willed his house to Patricia and the grandfather. They no longer need to sleep on the streets. Unfortunately...the house is dilapidated, but - where there's a will, there's a way...as most of these uplifting films from the 30's can attest to!!!
Pedophilia? Pfftt!!! Banish the thought!!!

Bing Crosby was a recording star at this point in his career. His film career would really take off in a few more years when he is teamed up with Bob Hope for their "Road" pictures. The songs he sings in this film are nice, which includes PENNIES FROM HEAVEN, SO DO I, and LET'S CALL A HEART A HEART. But I think the highlight of the film is a number by the jazz great Louis Armstrong - SKELETON IN THE CLOSET. The scene really stands out compared to the rest of the film and would make a nifty music video by itself.

Greg E
½ August 22, 2009
Join my page here on Flixter and check out my In Tribute to Louis Armstrong CD.

Bob W
December 12, 2008
Movie really pulls you in and is simply delightful. First appearance of legendary Louis Armstrong. Lotsa laughs and great tunes. Title song is one of my all-time favorites. Very cute, but still captures the depression era well.

Angela H
½ October 26, 2007
I felt "short changed" by the story. Strange doesn't even begin to cover this story.