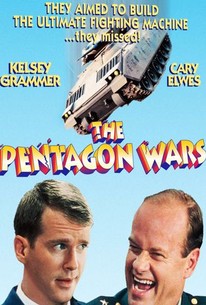 Excessive military spending provides the impetus behind this sharp, satirical account of an honest Air Force colonel who is so shocked at government spending in its development of a troop transport vehicle that he decides to launch a personal investigation as to why it has taken the military 17 years and $14 billion to create it. When a certain Pentagon General finds out about the Colonel's inquiry, he does everything he can to stop him.

Christopher Grove
as Congressman No. 1

Sam Anderson
as Congressman No. 2

Dominic D. DeNiro
as Guard at Military Base

Dann Florek
as General No. 1

Beau Billingslea
as General No. 2

Richard Riehle
as General No. 3

Freez Luv
as Clean Up Soldier

Brian Carroll
as Range Officer in Tower
View All

Critic Reviews for The Pentagon Wars

There are no critic reviews yet for The Pentagon Wars. Keep checking Rotten Tomatoes for updates!

Audience Reviews for The Pentagon Wars

Hilarious! A great comedy filled with lots of laugh that anyone can enjoy.