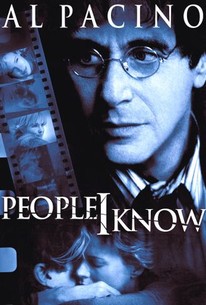 Critics Consensus: The derivative plot fails to cohere or draw the viewer in.

Critics Consensus: The derivative plot fails to cohere or draw the viewer in.

Critic Consensus: The derivative plot fails to cohere or draw the viewer in.

A powerful behind-the-scenes man in politics and show business finds himself skidding into a very public scandal in this taut drama. Eli Wurman (Al Pacino) was raised in the deep South, attended Harvard Law School, and has devoted his spare time to progressive political causes since working alongside Dr. Martin Luther King Jr. in the 1960s. However, Wurman now makes his living as a press agent and PR man, and while he's near the top of his profession, years of overwork, constant smoking and drinking, and ceaseless tension are taking their toll, leaving him on the verge of collapse, with only the prescriptions of his friend Dr. Napier (Robert Klein) keeping him on his feet. One of Wurman's biggest clients is Cary Launer (Ryan O'Neal), a fading film star with political aspirations who, after attending a disastrous Broadway opening, asks Wurman to do him a big favor -- bail Launer's girlfriend, Jilli (Téa Leoni), out of jail and keep an eye on her. Wurman manages to get Jilli out of the stir, but she insists upon being escorted to an exclusive sex and opium den for a night of heavy drinking and drugging, and then reveals to Wurman that she owns a device which she's used to record footage of the most public figures who attend the club, including Elliott Sharansky, a billionaire Jewish civic leader (Richard Schiff). That night, a half out-of-it Eli accompanies Jilli back to her hotel room when an intruder barges in and forces an overdose on her, killing her instantly. The next morning, Wurman has only fuzzy memories of what transpired. He decides to focus on his attempts to set up a political fundraiser, but has a hard time getting the right A-list celebs to appear, just as many of New York's power brokers aren't especially interesting in working with Wurman or Launer. In the midst of this chaos, Victoria (Kim Basinger), who was married to Wurman's late brother, arrives in New York and urges him to leave the city and his career behind while he still can. People I Know was screened in competition at the 2003 Sundance Film Festival. ~ Mark Deming, Rovi

Rex Reed (II)
as Himself

Daniel Whitner
as Lobby Guard No. 1

Jonathan Walker
as Doorman at Party

Kaity Tong
as Herself

Cynthia Santana
as Herself

Patrick Kiernan
as Himself

Sophie Dahl
as Tillie in the Mink

William Corcoran
as Lobby Guard No. 2

Jon Hendricks
as Himself

Mr. G
as Himself
View All

Critic Reviews for People I Know

The movie is weighted down with an excess of plot points that fail to coalesce.

Pacino with crazy hair and a gravepale face... inside clothes that seem too big and heavy for him. He is so concentrated, so compact. He sucks all the light out of the frame. He is the reason to see the film.

At one point, a character kids Eli about being 'moth-eaten,' but the term would be better applied to the film's crippling third act.

Dropped into this ocean of bathos, even Al can't tread water -- at that precise moment, he and his performance drown.

Plot is the weakest part here. What you'll enjoy in spades is its rampant wit, uncontrolled luridness, and corrosive sexual come-ons. Kisses here are as tender-hearted as toxic dumps. In fact, Pacino's Eli is sort of a one-man Valley of the Dolls.

Despite its marginally intriguing plot and some surprising insight into the New York political scene, this is frightfully dull.

A grim, depressing cautionary tale about the danger of mistaking business associates for friends and making networking more of a priority than real relationships.

[Starts] off like a B-version of Sweet Smell of Success before ending like a C-version of The Parallax View.

After watching this depressing film, I felt as tired as Al Pacino's character looked.

Audience Reviews for People I Know

Though the films themselves stylistically are completely different, the basic plots of "People I Know" and "Carlito's Way" are the same. Here, rather than a gangster, Pacino plays a burnt-out publicist eager to escape his shady way of life but, like Carlito, doomed never to do so. The story doesn't ever really get going but the acting is an absolute treat, with Pacino giving an immaculate performance, truly one of his finest ever.

Man, didn't have high hopes for this movie which was a good thing. This is one of the lesser known Pacino movies and for a good reason; it wasn't any good. Pacino did some okay acting, nice to see him play the old helpless role, but nothing really to see here, from anyone.