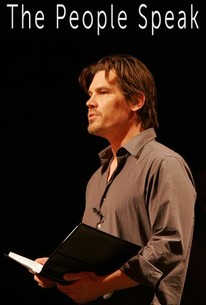 Inspired by Howard Zinn's bestseller A People's History of the United States and it's companion book Voices of a People's History of the United States this star studded documentary takes an unguarded look at our nation's decades-long struggle with the pressing issues of war, race, class, and women's rights. Viggo Mortenson, Danny Glover, Marisa Tomei, Matt Damon, and Kerry Washington, and other Hollywood stars stage impassioned readings of historical testimonies by the people who helped to shape our country's socio-political landscape, including Langston Hughes, Susan B. Anthony, Frederick Douglas, and Bob Dylan. Additional actors assume the roles of labor leaders, civil rights demonstrators, abolitionists, and various other trailblazers who weren't afraid to speak out during some of the more turbulent periods in our nation's history.

Critic Reviews for The People Speak

There are no featured reviews for The People Speak at this time.