The People That Time Forgot1977 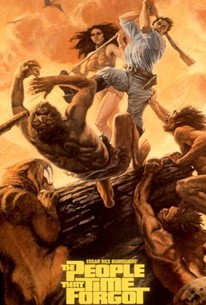 The People That Time Forgot Photos

A sequel to The Land That Time Forgot, this adventure fantasy centers on the attempts of a new expedition to successfully navigate a mysterious prehistoric world located deep within the jungle and rescue the man they left there on their first excursion.

Tony McHale
as Telegraphist
View All

Critic Reviews for The People That Time Forgot

A lame sequel to Connor's earlier Edgar Rice Burroughs adaptation, The Land That Time Forgot, which was at least occasionally lively.

The creature effects still resemble rubbery toys molded out of clay, with ignorance toward details of skin, bone, muscle, and realistic movement.

The film is not a classic, but following the story told by Tarzan's creator almost to the letter, no one can go far wrong for an entertaining afternoon.

Patrick Wayne is a dull lead (he has none of the big-screen presence of his dad The Duke), and the effects are even less polished than those in the previous film -- still, there's enough of interest to make it an entertaining and undemanding time-filler.

A 1970s childhood probably helps in appreciating the slightly shoddy charms of this unpretentious and cheery creature flick.

Audience Reviews for The People That Time Forgot

The sequel to the first much better film, the second of three novel adaptations of Edgar Rice Burroughs, another Amicus film and once again directed by Kevin Connor. Hence all films do look similar with their visuals. So the story continues, this time a small band (well three people) set off to find Doug McClure and his blonde bird. This time the hero is a former 'Sinbad' in Patrick Wayne, mechanic Shame Rimmer and sexy gorgeous paleontologist Sarah 'Ursa' Douglas (Superman II). Both Rimmer and Douglas starred in 'Superman II'. Altogether with a stereotypical big breasted primitive tribal female they go off in search of the lost characters from the last film on the same lost island. First thing we notice in this film (which wasn't really touched on that much in the first until the end) is the fact this lost island is gigantic. We really do see how far this lost world spreads when our heroes arrive and escape by plane, it pretty much goes on for as far as the eye can see with mountains and arid terrain. Well apparently its a lost polar continent (not just an island), once again I must ask how on Titans balls does an entire continent not get properly discovered? especially during the WW1 era, its a mystery in itself!. This film feels really silly, I know that sounds weird considering the content and the previous film but this just feels dafter. This time we get to see a more advanced tribe that look very similar to Japanese samurai, in fact if I didn't know any better I'd swear the film makers simply used the ancient Japanese warrior style as a quick easy fix instead of coming up with something original, hmmmm. Then we meet this big fat tribal leader guy who looks like Marlon Brando and his little slimy 'Grima Wormtongue-like' assistant. Looks a bit dubious if you get my drift. Its at this point, well leading up to it, that I started to realise this film is more of an 'Indiana Jones: Temple of Doom'/'Conan' type affair which feels more swords n sorcery than dinosaurs. The whole sequence within the nasty tribes lair felt very 'Conan-like', the rather huge tribal chief, his snivelling little minion and the muscle bound warrior bloke all felt rather out of place in this film. The whole setup for that part of the film was actually quite good in a tacky early 80's barbarian type way but just not right for this films universe. McClure is back here as the same character from the first film, seeing as its all about rescuing him what did you expect. Unfortunately the film diverts from the original novel quite a bit and this sees McClure's character die (spoil...ah who cares). Why? beats me, more dramatic I guess, this then leads to exactly the same finale as the first film where the island begins to erupt...again. A reasonable adventure flick that loses its way and kinda struggles to keep you entertainted. There are less dinosaurs, they actually look worse this time round believe it or not, its more about the tribes which is dull frankly. Wayne isn't as good as McClure that's for sure but luckily the combo of Sarah Douglas and Dana Gillespie is stunning, kept me involved. It just doesn't feel like this needed to be made really, its all about the dinosaurs for me and this film doesn't have that many, so what's the point?.

An okay sci-fi adventure movie, it's not all that interesting, and pretty boring for the most part, but it has some good scenes too, so it's okay.

The People That Time Forgot Quotes