The People Vs. Larry Flynt1996 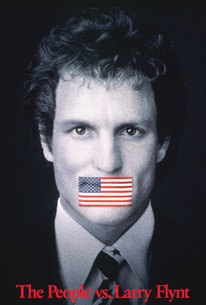 Critics Consensus: The People Vs. Larry Flynt pays entertaining tribute to an irascible iconoclast with a well-constructed biopic that openly acknowledges his troublesome flaws.

Critics Consensus: The People Vs. Larry Flynt pays entertaining tribute to an irascible iconoclast with a well-constructed biopic that openly acknowledges his troublesome flaws.

Critic Consensus: The People Vs. Larry Flynt pays entertaining tribute to an irascible iconoclast with a well-constructed biopic that openly acknowledges his troublesome flaws.

The People Vs. Larry Flynt Videos

The People Vs. Larry Flynt Photos

True story tale of Hustler magazine's creator Larry Flynt and his fight against the system when censorship mongors attempt to shut him down. Makes for good drama with excellent performances from Harrelson and Love.

Jan Triska
as The Assassin

Eddie Davis
as Announcer at Rally

James A. White
as Deputy Marshall

Michelle Robinson
as TV Reporter at Supreme Court
View All

News & Interviews for The People Vs. Larry Flynt

View All The People Vs. Larry Flynt News

Critic Reviews for The People Vs. Larry Flynt

It's been a long, dumb spell, but The People vs. Larry Flynt makes it OK to take your brain to the movies again.

An exultant comedy of American repression and revolt.

A brave, spectacularly entertaining -- and unexpectedly stirring -- account of Flynt's life that asks us to regard the publisher of Hustler magazine as an invaluable champion of our First Amendment freedoms.

One of the truly bizarre careers in recent American cultural life provides the source of tart and tasty amusement in The People vs. Larry Flynt.

Woody Harrelson plays Flynt with energy, and Courtney Love does at least as well as his wife.

We're really celebrating Hollywood's freedom to create biographies of anyone, no matter how high or low on the social ladder, and still come up with the same banal characteristics, messages and conclusions.

The entertainment value waxes and wanes as this biography largely sticks to Flynt's actual endeavors.

Long after you've grown tired of his escapades, the scenes in which he and Althea support one another against the slings an arrows of outrageous fortune are touching and, ultimately, genuinely tragic.

The movie is a lot of fun for long stretches.

I sincerely hope The People Versus Larry Flynt goes all the way and wins the Academy Award.

Audience Reviews for The People Vs. Larry Flynt

Milos Forman's The People Vs. Larry Flynt is a stunning drama about Larry Flynt, and the founding of the now famous porno magazine Hustler. At the heart of its story is not only the rise of Flynt, but also the right to free speech, which makes this a well layered drama that tells a truly engaging story. With great performances by Woody Harrelson in the lead role, Courtney Love and Edward Norton, The People Vs. Larry Flynt is a well crafted movie that Forman manages to keep you engaged due to a well written script that really sucks you into its story. Forman is one of my favorite directors and his dedication to the genre of film has made him one of the finest directors in the medium. The film presents a very interesting topic, one that is scared for everyone that is disgusted at censorship. Even if you don't agree with what Flynt has done in terms of his profession, you can agree that it is up to yourself to decide what is in good taste and what is not. I won't state my personal beliefs on Larry Flynt, but the film here works very well because not only is it an interesting story that is well acted and entertaining from start to finish, but it holds the values of free speech at its core, and that's why it's such a compelling film. I really enjoyed the film, and thought that the performances were top notch, the direction was immaculate and that it was a well made picture that shouldn't be seen as just the rise of a porn entrepreneur, but as a picture display the beauty of free speech and how it comes to protect us due to the fact that we are free to choose certain things for ourselves. Milos Forman has had a great filmography, and this film is yet another strong film to add to it. The People Vs. Larry Flynt is a great drama that definitely shouldn't be missed.

Highly engrossing biopic about the life and career of controversial porn mogul Larry Flynt. Besides the man in focus, it's also a story that depicts the struggle for one of the most fundamental corner stones in any given democracy: the right to free speech and publication. We follow Larry through his successes and failures, and the playboy (or rather to say Hustler) lifestyle that ultimately drives him into some serious conflicts with both his inner circle and official opponents. Superlative performance by Woody Harrelson, who does the title role so well, you'd think he was born for the job. I was also pleasantly surprised by Courtney Love, who is exceptional as his devil-may-care girlfriend. Granted that she pretty much plays herself, what with the drug addictions and all, but she still deserves an eulogy for her impressive acting. There's a lot of sex and nudity in the film, as can be expected, but nothing I'd label as gratuitous or redundant in any way. Rather, it serves a motivated purpose, while simultaneously treating us to some R-rated delights. Be sure to keep your eyes open for a cameo by the real Larry Flynt, who ironically plays a judge who is anything but dispositioned on letting his fictional self off the hook.

Quite a powerful film in regards to the First Amendment which gives us the right of free speech and press which is exactly what this film revolves around. It is the story of Larry Flynt's pornographic films and magazines; most notably Hustler which really made him the entrepreneur he is. Flynt loses the use of his legs due to an assassination attempt confining him to a wheelchair. Woody Harrelson stars as Larry Flynt and turns in a fine piece of character work. The brilliant Edward Norton portrays his lawyer Alan Isaacman which allows for first rate acting on both counts. And I must mention Courtney Love's brilliant portrayal of Flynt's drug addicted wife Althea. I think one thing that gives this film it's strength is that it proves the point of the industry that is often frowned upon, but is within the rights of every citizen should they wish to be involved in it. "If the First Amendment will protect a scumbag like me, it'll protect all of you- 'cause I'm the worst." Larry Flynt

Thios is a biopic about the life, career, and mostly, the legal troubles of Hustler Magazine publisher :Larry Flynt. Say what you will about the man's personal life, antics, and the business that he is a part of. You don't have to like the man or what he does (even his attorney admits he doesn't care for pornography), but you cannot deny that he made some important contributions to American spciety by giving people jobs, but more importantly fighting for basic constitutional rights. Like everything, there is a bias here that favors Flynt, and makes him out to be a rather sympathetic guy. The film also takes liberties as expected, but overall, this is more about ideas, concepts, and principles, than the story of a man who went from being a bootlegger as a kid to one of the biggest proprietors of smut. All of that is in this film of course, but Milos Forman and the writers put more focus on the former than the latter, as I think they should. I am disappointed that they might have been too sympathetic and less acknowledging of Flynt's less savory side, but they don't completely ignore it. Also, even with an R rating, they could have gotten away with showing just a tad more of the risque stuff that made Flynt legendary. The real Larry Flynt, when asked who he thought should play him responded with Michael Douglas. His wish was not granted, but Woody Harrelson does a pretty good job, even if he's not a complete ringer. He's the focus, but he's backed by a notable cast including his real life brother as Flynt's brother, Courtney Love (who is surprisingly pretty good) as his troubled (4th) wife Althea, whom he realy truly did love, Edward Norton as his attorney Alan Isaacman, as well as bit parts fulfilled by Vincent Schiavelli, Crispin Glover, and James Cromwell., As stated, Woody is really good, Love is good, Norton is pretty decent, and the bit players are good, albeit underfocused on. I don't know if all of the trials Larry Flynt went through are featured here, but it covers some major ones, most significantly Hustler Magazine V. Falwell in which televangelist Larry Falwell sued Flynt over an unflattering albeit satirical parody that suggested Falwell lsot his virginity to his mother in an outhouse. Since this is a fairly well known case, I don't think I'm really spoiling it by saying who won considering the verdict is quite a landmark and is more significant than maybe most people realize or are aware of...it was Flynt. With the content of the film and the ideas that are being defended therein, it really didn't move me. They were preaching to the choir. I agree wit hsome of what Flynt fought for, and I actually do have respect for the man, though he really isn't the savoriest of people. I've seen interviews with the real Larry, and despite what he does, he is a rather classy and smart guy. It doesn't seem that way in the movie (at least hardly ever), but hey, this is entertainment, not a documentary. You should give this a look. It's got good performances, capable direction, a decent script and is just a joy to watch.

The People Vs. Larry Flynt Quotes