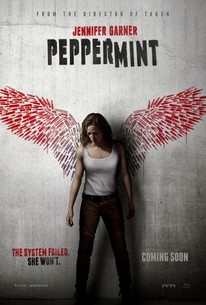 Peppermint is an action thriller which tells the story of young mother Riley North (Jennifer Garner) who awakens from a coma after her husband and daughter are killed in a brutal attack on the family. When the system frustratingly shields the murderers from justice, Riley sets out to transform herself from citizen to urban guerilla. Channeling her frustration into personal motivation, she spends years in hiding honing her mind, body and spirit to become an unstoppable force -- eluding the underworld, the LAPD and the FBI -- as she methodically delivers her personal brand of justice.

Tate Birchmore
as Boy on Bus

Bad timing can kill a movie that has everything going for it, but the problem with Peppermint isn't so much bad timing as tone deafness on an egregious scale.

From a broader perspective, the film marks an intriguing new stage in Hollywood's ongoing effort to figure out what action movies about women (and aimed at them) should look like.

There isn't anything that special to it. It doesn't rise above anything...disappointing despite a really strong performance from Jennifer Garner.

Peppermint seems to be an action movie two decades too late. Surely, Garner deserves better than this.

I really like the weightiness that [Jennifer Garner] brought to the material.

I cannot, in good conscious, recommend that anyone go see and support this movie.

John Ortiz caps off the action with one of the silliest speeches in action movie history. And that bar is pretty high.

The movie's feints toward "fun" are awkward, and Morel's lack of interest in even the most basic details feels downright contemptuous.

It is a completely different kind of hole-some than we're used to associating with Garner. This time around, the 'hole' is in the plot, and when the credits finally roll, we definitely do not want 'some' more.

Do you want to see Jennifer Garner be a bad ass for 90 minutes or not? Of course you do.

Jennifer Garner is out for revenge in the action-packed thriller Peppermint. When the killers of her husband and daughter are set free by a corrupt judge Riley North goes off the grid and returns on the five year anniversary of her family's deaths to get her own justice. Garner is excellent in this role and brings a lot of intensity to her performance. And the action sequences and fight scenes are extraordinarily exciting and dynamic. Yet, the film refrains from any gratuitous blood or gore; keeping the violence quick and rapid as North methodically takes out henchmen. Incredibly entertaining, Peppermint is a high-adrenaline action-film.