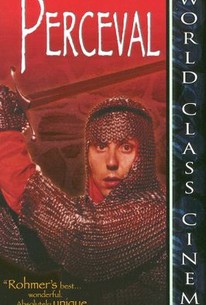 This film, set in the Middle Ages, follows the exploits of Sir Perceval, a legendary exemplar of chivalry and a member of King Arthur's Round Table. The story is based on the verse tale Perceval ou le Conte del Graal, as recounted by the 12th-century French novelist Chrétien de Troyes.

Anne-Laure Meury
as The Damsel with the Small Sleeves

Fabrice Luchini
as Perceval
View All

A conservative director's entry into new territory is a priori fascinating; observing him gradually painting himself into a corner of that territory is less so.

The film marries medieval passion with modern perspective and sires its own special magic.

The spirit of medieval drama lives in Rohmer's utterly unique, flagrantly theatrical adaptation… will enchant medieval enthusiasts and bewilder others.

The naïve Perceval's odyssey is depicted as a moral investigation, but is shot with a deft touch exhibiting great humor, wit and style.

Ultimately Rohmer's film is an intimate moral investigation, shot with an assured lightness of touch typical of the director.

There are no featured audience reviews yet. Click the link below to see what others say about Perceval!