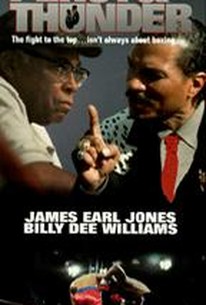 An ex-championship boxer (James Earl Jones) sees a chance at recapturing a taste of his former glory after discovering that Thunder (Courtney B. Vance), one of the amateurs he trains, has real potential. Unfortunately, Thunder has entangled himself with crooked, gang-connected manager Ralph Tate (Billy Dee Williams), and he is not to let the young fighter go without a fight. This drama was made for cable and was aired as part of Steven Spielberg's "Screenworks" project.

Courtney B. Vance
as Thunder

Percy Smith
as Other Trainer

Critic Reviews for Percy and Thunder

There are no critic reviews yet for Percy and Thunder. Keep checking Rotten Tomatoes for updates!

There are no featured reviews for Percy and Thunder at this time.