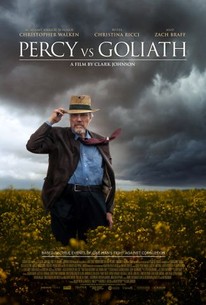 Academy Award (R) Winner Christopher Walken*, Zach Braff and Christina Ricci star in the true story of a small-town farmer taking on one of the largest agricultural and food manufacturing corporations. Percy Schmeiser (Walken), a third-generation farmer, is sued by a corporate giant for allegedly using their patented seeds. With little resources to fight the giant legal battle, Percy joins forces with up-and-coming attorney Jackson Weaver (Braff) and environmental activist Rebecca Salcau (Ricci) to fight one of the most monumental cases all the way up to the Supreme Court. *1978 Actor in a Supporting Role, The Deer Hunter. "ACADEMY AWARD" is a registered trademark and service mark of the Academy of Motion Picture Arts and Sciences.

Critic Reviews for Percy vs Goliath

There is an interesting story, and I'm glad to know about it...but other than that it's absolute TV movie-of-the-week stuff.

Flawed, yet compelling. And if one is willing to ignore Walken's penchant for pronouncing each word as if he'd never heard it before, there's a lot to enjoy here.

Walken keeps you watching thanks to his inherent charisma, still undimmed in his late 70s.

Why Johnson or his writers would want to suggest a parallel between their hero and a mafia boss is hard to fathom; perhaps the inspiration came from Walken, betraying a nostalgia for the days when he played more interesting roles.

It's a tried-and-true formula, but it comes up sparkling here because Walken's Percy and Maxwell's Louise are such a decent, salt-of-the-earth couple.

An involving and inspirational tale, highlighted by a Christopher Walken performance that is remarkably free of any showy tics or mannerisms and is a reminder Walken is a great actor first...

Based on a true story of one farmer fighting a giant industry -- Walken is great.

Didn't need to be as routine and drama-free as it is, but Walken gives it far more spirit than it possesses otherwise.

This inspirational drama tells the true story of a Canadian farmer who took on an agrochemical giant.

A clutch of strong lead performances from Walken, Ricci and especially Braff - who does a swell job as a meek, small-time legal hack pushed into the big time - help lift what could have been a mediocre power fister about big business baddies.

It avoids the saccharine, without ever becoming gruelling. That's a deceptively tough balance to strike, but Percy vs Goliath hardly puts a foot wrong.

Despite a solid performance from Christopher Walken, this is just another forgettable underdog story about a farmer taking on big agriculture.

There are no featured reviews for Percy vs Goliath at this time.