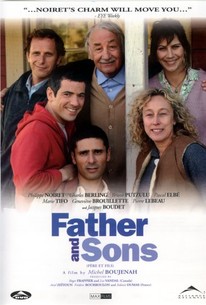 Directed by Michel Boujenah, Pere et Fils (Father and Son) centers around retired traveling salesman Leo Serano's (Philippe Noiret) decision to become closer to his three children, albeit late in life. Leo's first son, David (Charles Berling), is a longtime overachiever who runs his own plumbing fixtures company and employs his youngest brother, Simon (Pascal Elbe), in the warehouse. Pot-smoking Simon is blissfully unconcerned when it comes to the intricacies of his family, but David hasn't spoken to his unemployed brother Max (Bruno Putzulu) in years, and isn't particularly keen to build a relationship with his long absent father. However, when Leo convinces the trio that he's slated for a risky heart surgery in a couple of weeks -- in fact, Leo's physician had declared him perfectly healthy -- the broken family decides to take a spontaneous trip to Montreal. The film also features Marie Tifo, Genevieve Brouillette, Pierre Lebeau, Jacques Boudet, and Matthieu Boujenah. ~ Tracie Cooper, Rovi

There are no critic reviews yet for Père et fils. Keep checking Rotten Tomatoes for updates!

There are no featured reviews for Père et fils at this time.