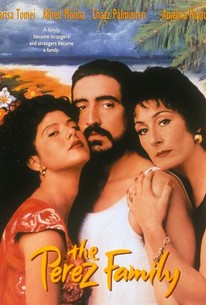 Old and new loves are turned upside down through a complex case of mistaken identities in this romantic comedy-drama. In 1980, Juan Raul Perez (Alfred Molina) is released from a Cuban prison after spending 20 years behind bars and is allowed to join a mass emigration to the U.S. While Juan was incarcerated, his wife Carmela Perez (Anjelica Huston) escaped to Florida with their daughter, and Juan lives for the day when they can be reunited. En route to Miami, Juan meets Dottie Perez (Marisa Tomei), a fiery young woman who wants to leave behind her career as a prostitute. Juan and Carmela miss finding each other when his boat reaches Miami, and immigration personnel mistakenly assume that Juan and Dottie Perez are husband and wife; when they learn that families tend to find American sponsors much faster than individuals, they play along with the mistake, even convincing other Perezes to pose as their child and grandfather. Juan discovers that trying to renew an old relationship isn't easy as one tries to start a new life, especially since Carmela has attracted the attentions of police lieutenant John Pirelli (Chazz Palminteri). Cuban jazz legend Arturo Sandoval contributed to the soundtrack.

Paloma Delaijrentil
as Transvestite on Boat

Ana Carballosa
as Woman of Many Faces

Critic Reviews for The Perez Family

The conclusion rushes by without sufficient development: You feel like there's a scene or two missing. But the movie ends with such optimism and bittersweet nostalgia, it sends you out smiling.

With non-Hispanic principal actors and Indian-born Mira Nair directing, this garish romance is a bit of an ethnic pot-pourri, but it's not quite as annoying as it sounds. Huston, in particular, gives it a touch of genuine class.

Mira Nair's consistent exploration of the search for home is admirable, but her movie is burdened by an unconvincing ensemble that's unable to elevate the serio-comic exploration of Cuban immigrants into a poignant tale.

The movie sometimes bends the plausible to set up a laugh, and most of the time I didn't care, because I was enjoying the company of the characters.

Mira Nair's Mississippi Masala found humor in ethnic chaos, and the Indian-born director does so again.

Sensuous and lush with a hint of Allende's magical realism in the bleeding of a man's broken heart and a string of rose petals trailing a line along the belly of a new lover.

Audience Reviews for The Perez Family

A ridiculous comedy, which seems to have a much worthy cast than this film gives it credit; Chaz Palminteri, Angelica Houston, Marissa Tomei and Vincent Gallo all of whom have appeared in much better quality films. The idea as a film is quite comical I guess, collecting family members to create a fiamily, but it was simply a film with a little bit of potential that went horribly wrong.