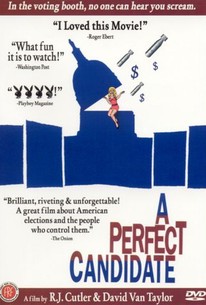 Set in 1994 during the Virginia Senate race between Oliver North and Charles Robb, this documentary explores the dark side of the campaign trail to offer a rather cynical view of the state of democracy by showing how neither candidate possesses the sterling moral qualities so coveted by the voting public. North, a notorious slick-talking lieutenant-colonel who was embroiled in an arms scandal during the late '80s and managed to come out reborn as a politician, is the primary focus of the film that allows the viewer to see both the public campaigns and the underhanded behind-closed-door tactics employed by both candidates. To underscore the action, the filmmakers also provide interviews with notable insiders who find the whole farcical process an source of unending disillusionment.

Critic Reviews for A Perfect Candidate

What fun it is to watch.

A fine, trenchant political documentary on a par with The War Room

The film fails as a portrait of a man. But as an insider's look at a Senate campaign, it holds interest.

One of a small handful of essential films about politics in this country.

An interesting, if uneven, documentary.

It's quite a revealing, amusing and ultimately dispiriting trip

Plays more like the satirical Bob Roberts than a documentary

The film dwells a bit too much on North's unpleasant campaign strategist, Mark Goodin.

Fascinating, if more than a little depressing

Personalities are being sold, not parties or philosophies, and A Perfect Candidate makes that process even more interesting because one candidate, Robb, apparently has no personality at all, while the other, North, has two.

Audience Reviews for A Perfect Candidate

There are no featured audience reviews yet. Click the link below to see what others say about A Perfect Candidate!