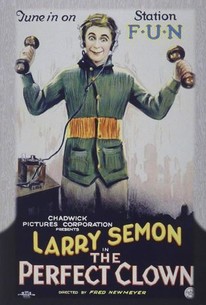 Pasty-faced comedian Larry Semon was both producer and star of the modestly titled The Perfect Clown. Semon plays Bert Larry, a young bank clerk forced to stay outside all night when he's unable to pay his board bill. As if this isn't bad enough, Bert has been entrusted with $10,000 in bank funds, which he must hold very close to his breast throughout the long, long night. Taking refuge in a barn, Bert and the bank's black porter (played by the unfortunately named G. Howe Black, actually a white man in blackface!) spend the night shivering in their boots. When a pair of escaped convicts show up, Bert and the porter are forced to change clothes with the crooks, leading to the expected mistaken-identity slapstick chase. But all ends happily, with Bert in the arms of his bank-stenographer sweetheart (played by Semon's wife Dorothy Dwan). Frequent Larry Semon sidekick Oliver Hardy shows up in a supporting role, bearing most of the brunt of Semon's comic tomfoolery.

Dorothy Dwan
as The Girl

Otis Harlan
as The Boss

There are no critic reviews yet for Perfect Clown. Keep checking Rotten Tomatoes for updates!

There are no featured reviews for Perfect Clown at this time.