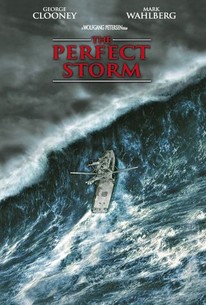 Critics Consensus: While the special effects are well done and quite impressive, this film suffers from any actual drama or characterization. The end result is a film that offers nifty eye-candy and nothing else.

Critics Consensus: While the special effects are well done and quite impressive, this film suffers from any actual drama or characterization. The end result is a film that offers nifty eye-candy and nothing else.

Critic Consensus: While the special effects are well done and quite impressive, this film suffers from any actual drama or characterization. The end result is a film that offers nifty eye-candy and nothing else.

In October 1991, a dying tropical hurricane from Bermuda collided with a cold front from the Great Lakes, resulting in a "perfect storm" of previously unknown destructive impact that resulted in 100-foot waves; tragically, the crew of a fishing boat was lost in the midst of the fearsome storm. Based on the best-selling book by Sebastian Junger, The Perfect Storm tells the story of the ship's brave and hard-working crew. Billy Tyne (George Clooney), captain of the Andrea Gail, hasn't had much luck finding catch on his most recent trips to sea, and with money short, he and his crew -- Bob Shatford (Mark Wahlberg), Dale Murphy (John C. Reilly), and David Sullivan (William Fichtner) set out again when they hear that the fish are running. Billy's hunch proves correct, but when the ship's refrigeration system goes haywire, they have to return to shore as quickly as possible before the fish spoil, sending them into the middle of the worst storm in history. The supporting cast includes Mary Elziabeth Mastrantonio, Diane Lane, Bob Gunton, and Karen Allen; Wolfgang Petersen, whose breakthrough film was the aquatic wartime drama Das Boot, directed. ~ Mark Deming, Rovi

Troy Hartman
as Gloucester Fisherman No. 2

Brad Martin
as Gloucester Fisherman No. 1

Critic Reviews for The Perfect Storm

The discrepancy between the sophistication of the special effects and the rudimentary dramaturgy results in a $140 million film that may raise your blood pressure, but leaves the rest of you distinctly unengaged.

Scary and sad are the main concerns here.

Think of something with the heart and soul of a Conrad yarn, yet buttressed by very special effects and shrewdly packaged for devotees of the Outdoor Living Network

A sense of reality is essential, and it's sorely lacking.

Exciting, engaging, and, at times, majestic.

We needn't appeal to the fact that this was all a true story to find it horribly dispiriting: it does a perfectly bad job just as a self-contained story in its own right.

While it's a shame that The Perfect Storm lacks a strong emotional core, you can't deny that its action sequences make for a truly awe-inspiring spectacle.

The thrills come in an emotional vacuum--even more problematic considering Petersen spends so much time trying to develop a human center.

An expertly crafted Hollywod entertainment...[constructed] as a series of grippingly fateful 'moments of truth.' [Blu-Ray]

The storm looks perfect, but the real danger here is the tidal wave of mediocrity and cliches.

Audience Reviews for The Perfect Storm

It is a shame how this movie turns a real nightmare into a dull Hollywood spectacle full of visual effects but with little character development, and it even makes the biggest mistake of showing more people caught in the storm instead of only focusing on the crew of the Andrea Gail.

First, there's all dese Hollywood types gettin' dere New England accents a workout, and dat ain't too bad none, nosirree, but the real star here is the CG generated storm that decently conveys the immensity of the sea and just how small we are in it. Not too shabby.

A movie that leads to nothing and you leave the theatre feeling crappy for seeing it. Its depressing, it leads to no conclusion, and i'm glad The Simpsons were bold enough to make fun of this crap. I never felt intense when watching it, and even with a all star cast it has nothing great about. Only reason I gave it a 1.5 is because the acting was decent. this film is not worth it.

A good effort from Wolfgang Petersen, The Perfect Storm is about the 1991 Hurricane that struck the New England Coast. Unaware that the storm is coming a boat dubbed the Andrea Gail is stuck in the storm and the fisherman try to make it home alive. The Perfect Storm is a terrific true story, packed with drama and action. The scope of the film is incredible. The storm itself is a sight to see on screen. The cast do an incredible at showing the immense dilemma that the characters are in. The Perfect Storm is a good film from Petersen, but considering it's made by the man who made Das Boot, this is slightly disappointing, but not by much. The film has a terrific story and a great cast, but you'd expect something more solid from the man who directed one of the greatest war films, right? But The Perfect Storm is still a good piece dramatic action. The cast do a fine job at bringing these characters to life, and you wish that they do survive the Hurricane. Unfortunately it is not to be. The Perfect Storm conveys a sense of human emotion perfectly, without making it feel too cheesy. The Perfect Storm relies on awesome special effects for the Hurricane scenes which make the film better than it is. The Perfect Storm is far from excellent, but it's definitely a solid action drama film with a top notch cast of actors. Wolfgang Petersen is a fine director, but this is of course not one of his strongest films. That honor belongs to Das Boot. The Perfect Storm is a thrilling film of survival against impossible odds, and sometimes those odds overcome the courage or insanity? of some men. A good, entertaining film.