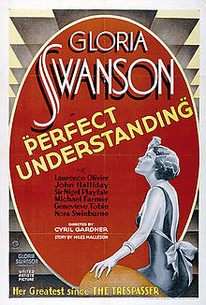 Star Gloria Swanson also co-produced this British film, a romantic comedy/drama that teamed her with a young Laurence Olivier. Judy Rogers (Swanson), an American vacationing in England, meets aristocrat Nicholas Randall (Olivier) and the two fall in love. They agree to marry but insist they'll never have any disagreements -- while both intending to maintain their independence. After an idyllic honeymoon, they are separated briefly and Nicholas strays with Lady Stephanie Fitzmaurice (Nora Swinburne). After he confesses to Judy, she decides to date the eligible Ivan Ronnson (John Halliday), but keeps the encounter a flirtation only. Their marriage becomes shaky, but Judy and Nicholas weather their doubts and come to love each other all the more. Note the film's co-writer: Michael Powell, who would later direct, write, and produce Black Narcissus and The Red Shoes (in collaboration with Emeric Pressburger). ~ Nicole Gagne, Rovi

There are no critic reviews yet for Perfect Understanding. Keep checking Rotten Tomatoes for updates!

Overheated fashion show with Glo not looking her best and the young Larry Olivier almost unbelievably handsome, except for the silly little mustache. Okay film with the always delightful Genevieve Tobin in support but it creaks here and there.