Perfume: The Story of a Murderer2006 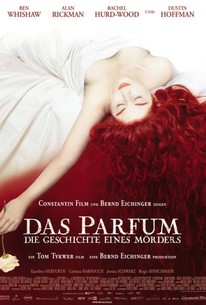 Critics Consensus: Perfume is what you'd expect from a Tom Twyker-directed movie glamorizing a serial killer: a kinetic visual feast, with a dark antihero that's impossible to feel sympathy for.

Critics Consensus: Perfume is what you'd expect from a Tom Twyker-directed movie glamorizing a serial killer: a kinetic visual feast, with a dark antihero that's impossible to feel sympathy for.

Critic Consensus: Perfume is what you'd expect from a Tom Twyker-directed movie glamorizing a serial killer: a kinetic visual feast, with a dark antihero that's impossible to feel sympathy for.

Perfume: The Story of a Murderer Videos

Perfume: The Story of a Murderer Photos

"Perfume" is a terrifying story of murder and obsession set in 18th-century France. Jean-Baptiste Grenouille has a unique talent for discerning the scents and smells that swirl around him, which he uses to create the world's finest perfumes. Strangely lacking any scent of his own, he becomes obsessed with capturing the irresistible but elusive aroma of young womanhood. As Grenouille's obsession turns deadly, 12 young girls are found murdered. Panic breaks out as people rush to protect their daughters, while an unrepentant and unrelenting Grenouille still lacks the final ingredient to complete his quest.

Karoline Herfurth
as The Plum Girl

Cristina Sola
as Woman With Bishop

Ariadna Cabrol
as Beggar Woman No. 1

Maia Jenkinson
as Beggar Woman No. 2

David Calder
as Bishop of Grasse

Simon Chandler
as Mayor of Grasse

Gonzalo Cunill
as Guard No. 1 Dungeon

Núria Casas
as Fishmarket Woman No. 2

Jerome Willis
as Councillor No. 1

Fermí Reixach
as Councillor No. 2

Derek Smee
as Councillor No. 3

Albert Pérez
as Councillor No. 4

Roger Salvany
as Guard No. 2 Dungeon

News & Interviews for Perfume: The Story of a Murderer

View All Perfume: The Story of a Murderer News

Critic Reviews for Perfume: The Story of a Murderer

Tykwer loses his cinematic grip when he tries to blend murder and piety. In his hands, the two don't emulsify.

Perfume: The Story of a Murderer is another nauseous example of style over content: a toxic tale of serial homicide set in 18th-century France that creeps you out faster than it makes you think.

Hated this movie. Hated it.

Perfume: The Story of a Murderer never tries to make Jean-Baptiste sympathetic but he's not rendered monstrous, either: He just is a victim of a passion larger and more powerful than any one man can handle.

[The filmmakers] render a portrait of Paris that both delights and overwhelms the senses. This is a movie where eyes turn into noses, which may run at the many ghastly sights presented.

For all the emotions it might evoke, only fans of edgy, deranged cinema will find this singular fantasy palatable.

Wishaw is excellent in the central role, which demands a murderous ambivalence akin to that of Raskolnikov in Dostoevsky's Crime and Punishment. What works well on the page, however, does not always necessarily work onscreen.

I despise this movie, more or less, for the promises it squanders.

It's a hard film to like, but it's even harder to dismiss, simply because it's never less than absolutely fascinating.

While you might not come away from a viewing feeling entirely satisfied, you will almost certainly have lots to talk about.

Audience Reviews for Perfume: The Story of a Murderer

Some nice production design but so loathsome that hardly makes it worth looking at.

Great costumes and good acting. But the story's a bit...odd. Not a satisfying conclusion at all.

An arthouse film involving obsession, murder, and...perfume? Odd, but intriguing. The broad concept (a man with a highly developed sense of smell, one that is so intense that it is the primary way he experiences the world strives to capture the essence of love) is kinda interesting, and has the potential to be riveting, but, with how the thigns are executed here, it's a disappointment. I like artsy films, I do. But man, even with a potentially intriguing and involving concept, this is just a plodding, overlong bore. That, and it gets really absurd and hard to take seriously at times, especially the over the top ending. Yeah, there are some moments that are really creppy, atmospheric, thrilling and well done, but overall this is a lackluster thriller that doesn't deliver the goods often enough. The production values are great, the film looks spectacular, and the music is quite good, but there's not a whole lot here that's really all that stunning. The cast is good, but their performances seem off, distant, and like they're jsut going through the motions. Plus, as I keep saying, the concept is potentially itneresting, but let's think about it: a sense of smell is the main driving force here. That's not an easy thing to make work, and I think they could have done a better job with the concept. There's no shortage of talent here, but I just think that everyone went about it the wrong way a lot of times, hence why the film is the way it is. It's not a total failure, but man, this is a tough one to sit through.

A French peasant boy born with a remarkably acute sense of smell becomes obsessed with capturing the scent of beautiful young girls leading him to murder. I must admit that I found the first act of this film captivating; the visuals are glorious and it gives a palpable feel for the time and context of the story complimented by some fantastic photography and nice performances. Once the plot takes a turn towards homicide however, all the sympathy you felt for Jean-Baptiste evaporates and with no central character to relate to, the narrative begins to seriously flounder. By the end the story becomes a load of existential guff and despite featuring surely the largest orgy ever committed to celluloid, I'd lost all interest in it. It's a shame because it started so well and there was enough of interest going on to make all of its flaws survivable... if it had just been 45 minutes shorter. A real missed opportunity.

Perfume: The Story of a Murderer Quotes