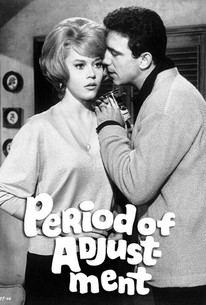 This was the first feature-length film directed by the very successful George Roy Hill. Based on a Tennessee Williams' novel, this standard comedy-drama focuses on two married couples who are both having a hard time of it, at least for now. The first couple, Isabel and George Haverstick (Jane Fonda in an early role, and Jim Hutton), are in trouble because George has bouts of intense fear ultimately brought on by his need to appear to be as macho as he can -- basically his problem is performance anxiety. The second couple, Ralph and Dorothea Baitz (Tony Franciosa and Lois Nettleton) have their problems centering on the fact that he married her for her money -- and she knows it. What she may not realize is that after six years of marriage he has fallen in love with her. Added to that difficulty is the problem of meddlesome in-laws.

Critic Reviews for Period of Adjustment

Adapted by Isobel Lennart and directed by George Roy Hill... Together they have composed a lead-in sequence which fulfils [Tennessee Williams's] intentions and neatly matches his wit.

Period of Adjustment is lower case Tennessee Williams, but it also illustrates that lower case Williams is superior to the upper case of most modern playwrights.

All in all, it's an appealing mix, even if the shifts in tone seem to unsettle cast and director alike. First-rate performances, though, especially from Fonda, as a wide-eyed Southern belle.

If anyone else but Williams had written this stage play, it might have been hailed by everyone.

It veered wonderfully between adult comedy and poignant tender moments.

Audience Reviews for Period of Adjustment

There are no featured audience reviews yet. Click the link below to see what others say about Period of Adjustment!