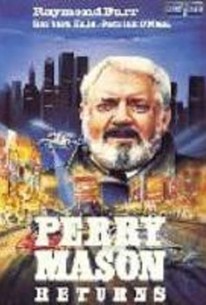 In the first of a series of made-for-TV films shot two decades after the original Perry Mason television series ended in 1966, Mason (Raymond Burr), now an Appellate Court Judge, must step down from the bench in order to defend his longtime secretary Della Street (Barbara Hale) against murder charges.

Mag Ruffman
as Salesgirl
View All

Not only has America proved it loves its "PM" TVs, but the show also provides a new kind of TV format--the recurring movie that is not a one-shot venture and not a full-fledged series.

This is all about characters you love and seeing them in their twilight years.

There are no featured reviews for Perry Mason Returns at this time.