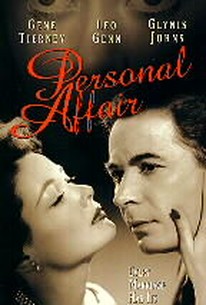 The star power of leading lady Gene Tierney enabled the British Personal Affair to get good bookings in the U.S. The story is set in motion by impulsive schoolgirl Barbara Vining (Glynis Johns), who develops a crush on teacher Stephen Barlow (Leo Genn). Barlow's wife Kay (Tierney) confronts Barbara, advising the girl to get over his misguided ardor. Shortly thereafter, Barbara completely disappears. All evidence suggests that she has either met with foul play, or at the very least has killed herself. With nothing but rumor and hearsay to go on, the Court of Public Opinion forms its own vituperative opinions, thoroughly ruining the lives of Stephen and Kay Barlow. In any other circumstances, the outcome of the film might be regarded as a happy ending. ~ Hal Erickson, Rovi

Nanette Newman
as Sally
View All

Terribly patchy film is of interest more for it's cast than any of the overheated melodramatics that it contains. It's feels very surface and rushed, things are thrown at the audience without ample explanation and are stated rather than felt. Gene Tierney's character in particular is quite vaguely drawn, why is she so insecure when she and Leo Genn seem to have a happy marriage? She is however the right actress for the part since her serene beauty almost always had that underlying hysterical edge to it. Glynis Johns although prominently billed really only has two scenes.