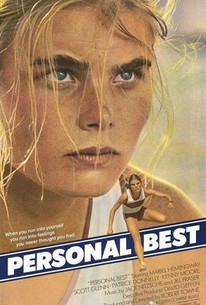 Critics Consensus: Mariel Hemingway has a career-making star turn in this highly physical drama about two Olympic athletes who find each other during competitive training.

Critics Consensus: Mariel Hemingway has a career-making star turn in this highly physical drama about two Olympic athletes who find each other during competitive training.

Critic Consensus: Mariel Hemingway has a career-making star turn in this highly physical drama about two Olympic athletes who find each other during competitive training.

In 1982, there was a brief cycle of homosexual-relationship films, none of which were successful enough to form the basis of a trend. Producer/director/writer Robert Towne's Personal Best is one of the finest. It stars Mariel Hemingway and Patrice Donnelly as athletes participating in the 1980 Olympics. Growing ever closer during the training process, Chris (Hemingway) and Tory (Donnelly) fall in love. Up to this point, Chris has been "straight," thus has trouble sustaining the relationship with older Tory. Their relationship is counterbalanced with the attitudes held by their male coach, Terry (Scott Glenn). While the homosexual element of the film is secondary to the endless shots of athletes in training, the critics latched on to the film's romantic angle, which may have sabotaged its chances for box-office success (the world was a different place in 1982). Personal Best was the directorial debut for Robert Towne, who was not to direct another film until 1987's Tequila Sunrise.

The leads are convincingly athletic, the characters well drawn.

[Robert] Towne's direction can be frustrating - at one point Donnelly and Hemingway run up a sand dune for what seems like five minutes - but the result is 50 percent more realistic than the average sports film.

But "Personal Best" only jogs along sometimes: It suffers from fleshing out.

Which horrible Eighties haircut to choose? Regardless, you'll be rewarded with some of the most startling and texturally stunning American cinema of that largely barren zone shortly thereafter to be known as the Reagan era. Score!

Robert Towne's Personal Best is a flashy, hip and quite fascinating investigation into the arduous process of working out sexual identity in today's narcissistic society and culture.

Personal Best is likable precisely because it is so unembarrassed.

It's fun, like any sporting event. And, like some record-breaking sporting events, it's defining, because in it women are seen as strong, vital and magnificent, and the lovers seem not extraordinary because of their homosexual liaison.

How this film sees a woman's body is, for American cinema, revolutionary.

Personal Best is a winner, thanks to its rich characterizations and the interesting behind-the-scenes look it gives us into its unique milieu.

The camera too often records and predicts what a lascivious man would want to see rather than an aesthetic observer.

Producer-director-screenwriter Robert Towne has fallen dismally short of his own personal best.

The camerawork is occasionally fussy and over-reliant on sporting clichés, but this is still subtle, sensual stuff.

There are no featured audience reviews yet. Click the link below to see what others say about Personal Best!