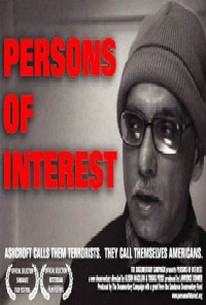 Critics Consensus: Persons of Interest is a powerful and thought-provoking documentary that explores the human costs of America's war on terror.

Critics Consensus: Persons of Interest is a powerful and thought-provoking documentary that explores the human costs of America's war on terror.

Critic Consensus: Persons of Interest is a powerful and thought-provoking documentary that explores the human costs of America's war on terror.

For her follow-up to 1999's Jesus' Son, director Alison MacLean switched gears, teaming with first-time filmmaker Tobias Perse on Persons of Interest, this documentary on the detaining of Muslim-Americans by the U.S. government. In the aftermath of the September 11, 2001, terrorist attacks, many Muslim and Arab-Americans were arrested -- often with no charges brought or legal representation provided -- as part of the United States' sweeping War on Terror. Through interviews with detainees and their families, MacLean and Perse attempt to shed light on the issue and detail the experiences of those imprisoned. Persons of Interest screened in competition at the 2004 Sundance Film Festival.

Critic Reviews for Persons of Interest

Reminds us once more that our freedoms are especially fragile in times of national peril.

While it's true the full backgrounds of those interviewed aren't supplied here (nearly all are Muslim, with a majority being Palestinian), the pain, terror and frustration of their experiences sounds and feels authentic.

The callous inequity of what you see and hear will floor you. It can't happen here. But it did. It does.

Delves into one of the most chronically undercovered 9/11 stories -- the still-unknown number of U.S. citizens and foreign nationals detained without trial in the wake of the attacks.

Explores the terrible fallout in the lives of Arab and Muslim immigrants whose human rights were violated by the U.S. Justice Department's zealous anti-terrorism campaign.

Watching Persons of Interest makes a viewer realize how fragile the rights that make this country great can be.

In a spare room with white walls, a sinlgle window, and a plain bench, Alison Maclean and Tobias Perse interview twelve former detainees in America's War against Terror.

A disturbing account of how fear can too easily foster injustice.

These terrible tales of honest lives interrupted and changed forever serve as a frightening indication of just how far astray fear has driven us as a nation.

Not a great movie, but a valuable and revealing document.

Audience Reviews for Persons of Interest

There are no featured audience reviews yet. Click the link below to see what others say about Persons of Interest!