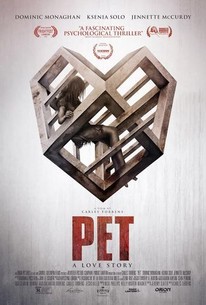 This haunting, psychological horror follows Seth, a lonely man working in an animal shelter. His monotonous routine is broken one day when he bumps into Holly, a girl from school who he soon becomes obsessed with. However, when she rejects his advances, Seth's obsession reaches a terrifying new level, with Holly hiding secrets of her own.

Harmony McElligott
as Comedian
View All

The film is engrossing, thanks to the director's skill at delivering sustained tension, and the excellent performances.

Pet sputters and pants its way to a kind of twist, one that's genuinely misogynist on the one hand but also too cretinous to be authentically repellent.

The films zigs where you expect a depraved zag, resulting in a smart and unsettling tale ...

[Its] strengths ... are undermined by a story that gives Seth an out and seems to suggest that we should forgive him. Not likely.

The screenplay quickly loses this moral clarity as the plot twists pile up and the power balances shift.

The constant power flipping allows for some interesting explorations of both the misogyny and misandry demonstrated by the main characters, and the way they justify their actions through the philosophical lens of love and sacrifice.

Monochrome dialogue pieces contrast with forced moments of emotion and it is at that moment that we wonder if the film would not have worked better as a more explicit parody. [Full review in Spanish]

The tension ratchets up spectacularly and your blood pressure rises in the anticipation of what may lie behind the next corner.

Pet is a psychological horror that dares to be not only different, but also memorable.

If the first part of the film is solved with technical soundness ... everything changes when the plot takes a bizarre, rather than unexpected, turn. [Full review in Spanish]

This cunningly nasty psychological horror thriller does a good job of wrong-footing the viewer.

Biggest pile of over compensating rubbish. It's a over the top cat and mouse movie. But flops from the very start.

This may shock you all, but I've never been in love. I'm being sarcastic, of course you shouldn't be shocked about that revelation. But, yes, I've never been in love with anyone. I understand the whole 'love is sacrifice' thing, relationships are full of compromises and sometimes you have to put your own pride aside in order to make the other person happy. You may feel like you compromised who you are, but that's just how successful relationships work, both sides have to compromise on certain issues. And that is the basis of this movie, which starts off simply enough. Seth is a very lonely guy who, clearly, hasn't ever truly had a serious girlfriend. He sees a former classmate while riding on the bus and he strikes up a conversation with her. The conversation is a little awkward, since Holly, the former classmate, does not remember him. This strikes up an obsession with Seth, who looks Holly's social media accounts up and finds out her likes and dislikes. He starts following her, going to her work, going to the bar her boyfriend works at. He's just acting like a fucking weirdo stalker. To me, before the turning point in the flick, he was a harmless stalker, but a stalker nonetheless. One night, while following Holly, Seth comes across her killing a homeless man and setting him on fire. This is when Seth puts his plan into play to kidnap Holly in order to stop her from murdering more people (Seth found a journal that detailed the death of all her other victims) and, most importantly, in order to save Holly from her more violent nature. So the movie, from trailers, is very purposely misleading in a way that makes watching, honestly, really fun. The trailers lead you to believe that Holly tries to manipulate Seth into releasing her because Seth is a psycho asshole. You think that she fears for her life while watching the trailers, so it's more understandable that Holly would use everything she can at her disposal to get Seth to do what she wants. But, realistically speaking, Seth is the 'good' guy in this story. Of course, he doesn't come out of this with completely clean hands, since he murdered his co-worker to keep him from blabbing about where he's keeping Holly locked up in a cage. Honestly, while the movie isn't perfect, I legitimately did like this quite a bit. I thought the movie was well-written with good tension. The film slowly builds up to its climax, they don't give you too much at one time. The relationship between Seth and Holly, clearly, is the strongest part of the film. Their back and forth talks, trying to establish who's in control of the situation, are some of the best parts of the entire movie. Is the story perfect and is it without holes? No, it's not and there are some plot holes, but given the context of everything, I still enjoyed this story and all the interesting places that it goes to. Ksenia Solo (Holly) and Dominic Monaghan (Seth) are both really good in their roles and they have great chemistry together. Dominic has a perfect harmless weirdo stalker face. I legitimately do believe that he wanted to help Holly get better. He went about it in the wrong way, for sure, but I do believe hat he legitimately wanted to help. Ksenia Solo is also perfect in her role as the manipulative psychopath. She knows how to push Seth's buttons to get him to do exactly what she wants. It's a good mix and the leads are great together. The casting was pretty much perfect and I can't complain about that in the slightest. There's a decent amount of gore and, while it was solid, it honestly felt a little out of place. I say that because the movie's far more psychological in its approach, exploring the manipulative relationship between Seth and Holly. The gore is good, for sure, but it doesn't fit in with the rest of the film. With that said, I legitimately liked this movie, even though I see response was mixed. For my money, this is a good horror movie. I'd recommend it, but I can see how some might people not like this.