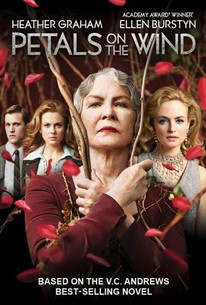 Petals on the Wind Photos

A decade after Cathy (Rose McIver, "Masters of Sex", "Once Upon a Time"), Christopher (Wyatt Nash, "Pretty Little Liars") and Carrie ("Bailey Buntain", "Bunheads") escaped from their grandparents' attic at Foxworth Hall, "Petals on the Wind" continues to follow the twisted plight of the family as they attempt to put their sordid past behind them, but soon discover certain secrets can't be left behind. When Cathy finds herself in an abusive relationship with a fellow dancer, Julian (Will Kemp, "90210"), Christopher and Cathy are forced to face the forbidden feelings they developed for one another while coming of age during captivity. But when tragedy strikes the Dollangangers once again, Cathy returns to Foxworth Hall to confront her grandmother and seek revenge on her mother with a plan to seduce her husband Bart (Dylan Bruce, "Orphan Black"). When Christopher runs to Cathy's side, the two are determined to start over again - together. (c) Lifetime TV

Will Kemp
as Julian

Critic Reviews for Petals on the Wind

There's enough of the all-out V.C. Andrews flavor to make this installment worth a look for those who want to catch up with a family of soap people 30 years in the making.

Where Flowers was airless and po-faced, Petals is manic and sudsy, speeding through a treasure trove of sleazy plot twists like CliffsNotes on crack.

Soapy, sudsy, and scandalous, this take on the much-beloved (and much-reviled!) V.C. Andrews' book is a lot more fun than Lifetime's previous Flowers in the Attic.

[Petals on the Wind] commits the deadliest of movie sins: it does not shock, it does not move, it does not provoke...unless yawns count, it is simply a bore.

Audience Reviews for Petals on the Wind

Petals on the Wind Quotes