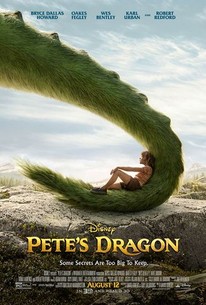 A reimagining of Disney's cherished family film, "Pete's Dragon" is the adventure of an orphaned boy named Pete and his best friend Elliott, who just so happens to be a dragon. "Pete's Dragon" stars Bryce Dallas Howard ("Jurassic World"), Oakes Fegley ("This is Where I Leave You"), Wes Bentley ("The Hunger Games"), Karl Urban ("Star Trek"), Oona Laurence ("Southpaw") and Oscar (R) winner Robert Redford ("Captain America: The Winter Soldier"). The film, which is directed by David Lowery ("Ain't Them Bodies Saints"), is written by Lowery & Toby Halbrooks based on a story by Seton I. Miller and S.S. Field and produced by Jim Whitaker, p.g.a. ("The Finest Hours," "Friday Night Lights"), with Barrie M. Osborne ("The Lord of the Rings: The Fellowship of the Ring," "The Great Gatsby") serving as executive producer. For years, old wood carver Mr. Meacham (Robert Redford) has delighted local children with his tales of the fierce dragon that resides deep in the woods of the Pacific Northwest. To his daughter, Grace (Bryce Dallas Howard), who works as a forest ranger, these stories are little more than tall tales...until she meets Pete (Oakes Fegley). Pete is a mysterious 10-year-old with no family and no home who claims to live in the woods with a giant, green dragon named Elliott. And from Pete's descriptions, Elliott seems remarkably similar to the dragon from Mr. Meacham's stories. With the help of Natalie (Oona Laurence), an 11-year-old girl whose father Jack (Wes Bentley) owns the local lumber mill, Grace sets out to determine where Pete came from, where he belongs, and the truth about this dragon. Disney's "Pete's Dragon" opens in U.S. theaters on August 12, 2016.

Here Be Dragons! Famous TV and Movie Fire-Breathers
The Crimes of Grindelwald and Three Other Films about Fantastic Beasts
Pete’s Dragon, The Handmaiden, Iron Fist and More on Netflix and Amazon Prime This Week

Pete's Dragon is family entertainment at its best.

[Pete's Dragon] is a tentpole movie that feels personal.

A remake of the equally unmemorable children's film of 1977,

Like recent children's films such as BFG and The Jungle Book, this is another sweet reminder that strong stories and spirited characters are what make good films, and that childhood is something we all have forever.

Pete's Dragon is perfect family viewing, and it might just want to make you want your own dragon friend.

It is, above all, gentle, sometimes to a fault.

In a summer full of remakes and sequels, Disney's latest live-action take on an animated classic exudes a breath of fresh mountain air and leads us to believe in Elliot, the Millhaven Dragon.

The gentle nature and leisurely pace might cause a few Coked out kids to fidget, but most should react positively to the picture's sense of adventure and discovery.

It is relatable to watch as an adult, it is fantastical and adventurous for a child, and it needs no frills or shocks to make it good.

It's the kind of subject matter - and production - that could inspire a decent theme park ride more than one's imagination or sense of wonderment.

A film to be adored by parents and children alike.

Here is an example of a good remake, where the premise is similar to the original but the execution isn't handcuffed to fit a certain storyline.

Lovable, exciting and well done fantasy adventure for kids of all ages. Sure, here even the bad guys aren't that evil and there are some tropes from the long history of The "friends with a mysterious creature" genre, but The likable cast and great effects make for a thoroughly entertaining and touching film. The ending is particularly beautiful.

Imagine tryin ta get a nap in the back seat of the family car while your brothers and sisters play with the family puppy in the seat next to you. That's what this film is like. And that's not a bad feeling.

Pete's Dragon develops into a sentimental bit of fluff. It certainly helps that young actor Oakes Fegley is extremely natural and the CGI creature is realistic as well. Elliot is not your typical dragon. Instead of scales he has fur. He can even disappear when he deems it necessary to hide from danger. He's also exceptionally loving and protective. Their relationship is not unlike that of a boy and his dog. It's this bond that forms the foundation of the drama. The two unquestionably have a warm rapport but it's a wispy premise on which to build an entire production. Oh sure once other humans discover Elliot, they threaten his safety, but you knew that was going to happen 20 minutes into this fantasy. Everything unfolds in a predictable fashion. This "boy meets pet" fable was released to near universal acclaim. I expected a saga with a much higher level of creativity. I liked Pete's Dragon, but I didn't love it. I really wanted to love it. fastfilmreviews.com