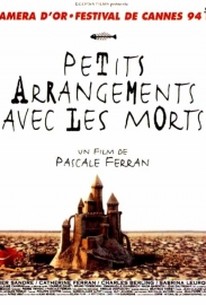 A handful of people find themselves haunted on an idyllic summer afternoon by memories of death and loss in this contemplative drama from France. Siblings Zaza (Catherine Ferran) and Francois (Charles Berling) are enjoying a day at the beach with their brother Vincent (Didier Sandre) when Zaza and Francois each find themselves reminded in different ways of a tragic incident of 20 years ago when their younger sister died in an accident with a motorbike. Meanwhile, the grown-up Vincent builds a sand castle, as a young boy, Jumbo (Guillaume Charras), guards his creation from the waves. Jumbo, however, can't keep his mind from straying to thoughts of a close friend who recently died of cancer, and the boy can't help but imagine that he could have somehow prevented the death if he had tried. Director Pascale Ferran's work on Petits Arrangements avec les Morts was awarded with the Golden Camera at the 1994 Cannes Film Festival. ~ Mark Deming, Rovi

Nadia Barentin
as The mother

Marie Henriau
as Specialist of ants

There are no critic reviews yet for Petits Arrangements avec les Morts (Coming to Terms with the Dead). Keep checking Rotten Tomatoes for updates!

There are no featured reviews for Petits Arrangements avec les Morts (Coming to Terms with the Dead) at this time.