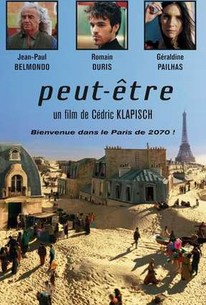 What if you could step 70 years into the future from a portal in your bathroom? French director Cedric Klapisch asks this question and many others in this oddball sci-fi flick. The film opens at a wild Buck Rogers-themed New Year's Eve party on December 31, 1999. After smoking a requist amount of drugs, 25-year-old Arthur (Romain Duris) and his girlfriend Lucie get in the millennial spirit with a spontaneous romp in the bathroom. She is aching to have a kid, though Arthur is more ambivalent on the matter, and at the critical moment, he withdraws. Later, he uses that same bathroom for its intended purpose, and he discovers a ceiling panel that transports him to the sun drenched Paris of the 21st century, which could easily be mistaken for northern Africa. Much of the city looks like a Moroccan souk set amid the Sahara. Only the occasional Mansart roof and the now much shorter Eiffel Tower poking out of the sand reminds Arthur that he is indeed in Paris. He soon meets a white-haired old man named Ako (played by New Wave veteran Jean-Paul Belmondo) who informs him that he his Arthur's son. Ako and his offspring beseech the still vacillating Arthur to impregnate Lucie ASAP so that they may exist.

There are no critic reviews yet for Peut-être (Maybe). Keep checking Rotten Tomatoes for updates!

There are no featured reviews for Peut-être (Maybe) at this time.