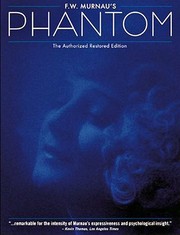 Andrey B
½ October 2, 2017
I don't understand the frustration of critics about this movie. It's a solid piece of work by Murnau, dream-like and interesting. Sure it's not as haunting as his later works but it is still a nice example of his craftsmanship. It tells the story of man's obsession and uncontrollable instincts - quite a familiar theme for German expressionism, isn't it. The man is haunted by the phantom vision of a girl he, probably, once saw driving a carriage that knocked him down. Ever since he is obsessed with finding this girl and begins his slow moral and physical descent into the abyss of various vices. He passes all phases of transformation: desire, decay, despair, crime, submission, atonement and ultimate redemption.

David B
April 4, 2012
I have to say, though is by far secondary Murnau, it was still a very intersting melodrama filled with beautiful images and some groundbreaking special effects. The "Totters Day" sequence is masterful.

Super Reviewer
Aj V
December 16, 2011
I wasn't impressed, interested, or put off by this film... in fact I didn't feel anything but boredom towards it. The plot sounds so promising, but the picture doesn't deliver. Even though my DVD was of poor quality, I couldn't get into this movie at all. I expected more from a film called Phantom.

Super Reviewer
Eric B
November 7, 2010
Frankly, this film stinks. It earns two stars for F.W. Murnau's direction, but the melodramatic story is absolutely awful. The lead character (Alfred Abel, who otherwise did some fine work with Fritz Lang) is a twitching idiot who throws away his life after falling in love with a passing stranger whom he never encounters again, and the film bets all its chips on us sympathizing with him rather than believing he's a ridiculous fool. Then he goes even further, bankrupting himself by throwing gifts at a shoddy lookalike woman who does even less to deserve his affection. And heaven knows why the title suggests a horror movie -- the only horror is the script.

To add insult to injury, the film tacks on a cheap, happy ending which is totally unearned.

Super Reviewer
Cindy I
½ October 7, 2010
Not what I expected from F.W Murnau. It didn't have the beauty of SUNRISE or the mystery of NOSFERATU. And the title is a trifle misleading, in that I was expecting a ghost story of some sort. Instead, the title refers to obsessive "phantoms" of desires and dreams that haunt one's thoughts. This film resembles somewhat THE BLUE ANGEL in that a man's chance meeting with a mystery woman and his subsequent obsession of same leads to his downfall. Performances were a bit over-dramatic, but that is to be expected for 1922. And I have a hard time finding a lot of faults with silent German cinema. All in all, not a masterpiece but good enough to hold my attention for 2+ hours.

Miguel S
July 1, 2010
Talk about love at first (and only) sight!!!! "Phantom" is a silent german movie directed by the famous F.W. Murnau, who later would direct the magnificent "Sunrise" (1927), and written by Thea von Harbou, Fritz Lang's wife at the time, and who wrote such classics as "M" (1931), "Metropolis" (1927) and the "Dr. Mabuse" series, until she became a nazi and divorced Lang, who fled to America. But back in early 1922 Murnau was famous for his also great "Nosferatu" and so, when later in the year he released a movie by the name of "Phantom", everyone expected another darker fantasy genre. But the phantoms in "Phantom" are others, are the phantoms of the soul and conscience. A good prequel to the emotional depths of "Sunrise" but without really getting close to the immortal status in film history that "Sunrise" holds, "Phantom" is a story about an innocent and naive man falling into the depths of corruption and shame. Yet it is told in flashback, so we know that it will end well. Lorenz Lubota (played by Alfred Abel) is a public civil servant devoted to his mother who aspires to be a poet. His mother is a poor old woman, his brother appears in two scenes only and his irrelevant, and his sister chose the bad life, a prostitute. His editor friend who beliefs in his talent has a daughter who loves him, although he does not notice her. But we know, because of the first scene in the movie, that he will marry her in the end! There is also a rich aunt who trusts him and a scoundrel, the sister's current boyfriend. The twist is, honestly, a stupid one. One day he is run over in the street. A lady helps him get up. He looks in her face, he falls in love instantly. He follows her home and that's it, he never sees her again. Ever. But he becomes madly in love with her, and supposes he needs money to woo her. So he becomes an easy and gullible pray to the scoundrel and to another hooker who looks like that girl he thinks he loves. So they convince him to rob the aunt, and squatter all the money on alcohol, parties, presents, etc. Lorentz always regrets, but his obsession with the girl and the threats that they will denounce him unless he complies make him fall deeper and deeper. He looses his job, his mother gets sick, he tries to swindle the aunt again. Off course, it all turns bad, but in the end is made right. Murnau was a delicate director, so this descent into the abyss is magnificent, with a touch of delicacy like the ones that exist in "Aurora" or the Lillian Gish films of D.W. Griffith. Yet, "Phantom" has two flaws. First the reason for his descent. A girl he sees once for 30 seconds? It doesn't make much sense really. He steals, lies, loses his job, etc, just for her? Was he that innocent and naive to begin with? Was he the saint lead by bad wolves the movie makes him out to be? And second, it is too long. After a while the story is the same, he regrets, he wishes to go back on track, but can't because of the threats over his head. Half an hour less of film would produce the same results. But all in all, a delicate and easily watchable silent film about how easily anyone can be corrupted, but not in the least comparable to "Sunrise". Thought lost for many years, a print of "Phantom" was found and restored, and is now available on DVD.

Eric B
March 12, 2010
Aside from a handful of shots, there's really nothing Expressionist about this film. Unsympathetic characters, slow pacing and painful melodrama burden this film, which is easily among Murnau's least interesting.

Adam S
January 22, 2010
Murnau employs similar expressionistic special effects here as he did in "Nosferatu" the year before, for similar psychological symbolic effect, but where "Nosferatu" has a horrific quality to it that remains inherently eerie, this film about the deterioration of a poor poet as he falls spellbindingly in love with an unobtainable vision, has more in common with the later "The Last Laugh", which has similar themes of obsession, guilt, pity, and hard earned redemption.

Madeline M
November 24, 2009
I don't think this movie ever knew what it wanted to do, which is weird because usually I think Murnau has a very definite plan and then he does it, with excellent style. But here . . . it seems like a domestic drama or personal tragedy, but without any of the emotional truth or power of Sunrise. I guess it needed to be more creative? Probably Alfred Abel was a poor choice for this role, too.

Sören G
½ April 3, 2009
The story is rather uninteresting, which wouldn't matter much if the visual finesse would have been on par with Murnau's major works. But now, even though it is beautifully shot and showes som inovative editing, it comes out as a bit lengthy and unfocused. Still worth watching. Twice. As any piece by the greatest silent director of them all.

Elijah B
December 3, 2008
I had a major catharsis with this film. it is rare that new musical ccompaniment can meld so well with a silent film, biut somehow Robert isreal has finally equalled the epic scores of Carl Davis (Greed, Flesh and the Devil), and created a score (the first I have ever heard that he has not cimply compiled from other pieces) which would disable the film should it be replaced. The film itself, while very simple in the plot and extravagant in special effects, seems to evoke deeper feelings than any other Murnau film, except for SUNRISE. In a sense, it is a precursor to SUNRISE, in that it has a very similiar plot; man falls in love with woman and has many hallucinations and dreams about her, torturing him to the core. Alfred Abel's performance is the best he's ever done and although he is very rigid, it connects on a personal level. He is a simple, callow fellow, a clerk who reads every chance he gets. He is very studious and his education is self produced. He has become so engrossed in fiction that he cannot relate to the real world, hence his fantasies and taking poetic liberties with reality. At the same time, his aspirations bring about his social downfall and after a night in jail he returns to the world, enlightened. I cannot say much for Lil Dagover's performance or that of Lya Di Putti, but the only female in the cast who is a decent actress (other than the mother), if Grete Berger. She is the only actress who knows how to perform, in this specific film. Dagover and Di Putti provide a waxworks fascination, lacking personality. The mother and the aunt are character roles, illustrating two different ends of the spectrum of society. Both actresses play the roles as though this were a cheap Grand Guinol melodrama, but in some ways it heightens the effect. All in all, this is a wonderful film and an excellent restoration by the Murnau Stiftung. For those of you film buffs, this DVD belongs on your shelf next to Dreyer's THE PASSION OF JOAN OF ARC and Sjostrom's TERJE VIGEN.

Super Reviewer
cody f
November 30, 2008
At times visually stunning, but the story is weak and boring. You see flashes of Murnau's genius in Phantom, but compared to his later work(Sunrise & Pandora's Box) this film fails.

Steven B
October 10, 2008
Oh-so-brilliant, sweet babies. Organic photographic effects that will bend your mind. The nightclub melee is a miracle of pacing. Several sequences convinced me that I was hearing music OTHER THAN the live accompanist. I lovingly hurl a resurrection bomb at F.W. Murnau: SHAPOW!

Ethan Y
June 30, 2008
I've gotta say I expected more from a collaboration between Thea Von Harbou (Who wrote Metropolis) and F.W. Murnau. The stories wanders so much, with a lot of unneccesary subplots. It's not a complete waste however. Alfred Abel (Also in Metropolis) is excellent as Lorenz, and there are some absolutely brilliant and beautiful moments. They just happen to be few and far between.