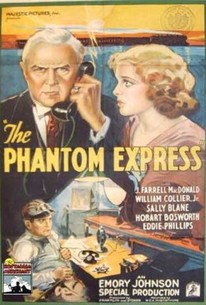 It is all but impossible to dislike a film as gloriously corny as The Phantom Express. The title is derived from an early scene in which veteran engineer Smokey North (J. Farrell McDonald) wrecks his own train while trying to avoid a head-on collision with another. Suddenly, the other train disappears into thin air -- or at least that's Smokey's story. No one believes this incredible tale, and the old man is unceremoniously fired. For the sake of Smokey's pretty daughter (Sally Blane), the railroad-company president's son (William Collier Jr.) does some investigating of his own, ultimately uncovering a diabolically clever scheme hatched by the villains. Even those viewers who are inclined to laugh out loud at the film's ridiculous dialogue will be held in thrall by the pulse-pounding climactic train chase.

Jack Pennick
as Bubba - a Thug

Allan Forrest
as A Thug

Brady Kline
as Slim - a Thug

There are no critic reviews yet for Phantom Express. Keep checking Rotten Tomatoes for updates!

There are no featured reviews for Phantom Express at this time.