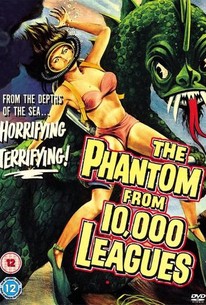 The Phantom from 10,000 Leagues Photos

Kent Taylor and Rodney Bell are investigating several mysterious underwater deaths, supposedly caused by a sea "phantom." The pair suspect that a professor of oceanography (Michael Whalen) knows something about the phantom, which he most certainly does. The phantom, a mutated sea monster, is the result of the prof's e-e-evil experiments with an "atomic ray." Both villain and phantom (which looks like an ulcerated beach toy) are dispatched by a few sticks of TNT. Phantom from 10,000 Leagues is just one more grade-Z horror flick of the 1950s in which more time was spent coming up with a catchy title than on the film itself.

Michael Garth
as Sheriff
View All

Critic Reviews for The Phantom from 10,000 Leagues

There are no critic reviews yet for The Phantom from 10,000 Leagues. Keep checking Rotten Tomatoes for updates!

Audience Reviews for The Phantom from 10,000 Leagues

The synopsis on here makes the movie sound better than I remember it, but I should probably see it again sometime.

This Came in the MGM Midnite Movies Double Feature. Along with Beast with 10,000 Eyes. Funny how they doubled up 10,000. Its about a light in the bottom of the sea, that has cause radiadion mutations, and a beast or dude in rubber suit guards it. Its one of thise dull creature feature films on friday night that was never repeated. get it in multi film package and you will do alright, Gosh you gotta love watching movies, I think I have no life help me. Applicants apply via e-mail.

The Phantom from 10,000 Leagues Quotes