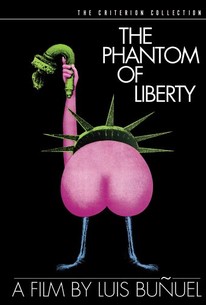 The Phantom of Liberty is the Luis Buñuel film in which eating is presented as a private function, while going to the toilet is a social event. It is also the film wherein a peddler of "filthy French postcards" deals only in harmless scenic pictures. It is also the film in which an indiscriminate sniper is lauded as a hero. With all this going on, we should not be surprised that a little girl, who remains in full view of the audience throughout, is regarded as a missing child. Imagine the fun 20th Century-Fox had back in 1974 when trying to come up with an advertising "handle" for the doggedly indescribable Phantom of Liberty. They certainly could not exploit the aforementioned toilet scene, nor the sequence in which a group of monks use their religious medallions as poker chips.

Claude Jaeger
as Colonel of Gendarmes

Pierre Francois Pistorio
as Her Nephew

Bernard Verley
as Captain of Dragoons

Maxance Mailfort
as Lt. of Dragoons

I. Carriere
as Veronique Foucauld

Jean Mauvais
as Policeman
View All

[Luis Buñuel] made sure that this isn't such an easy pill to digest, though its delightful humor goes down just as easily.

Beneath its lucid exterior, beneath its classical style, The Spectre of Liberty is one of those poetic works: a coherent enigma, inexhaustibly prismatic.

A tour de force, a triumph by a director confronting almost impossible complications and contradictions and mastering them. It's very funny, all right, but remember: With Buñuel, you only laugh when it hurts.

The physical production is stunning to look at. The cast is large, first-rate, but the presence that dazzles us is that of the Old Master, just off screen, mercilessly testing our senses of sanity and humor.

This heady masterwork isn't particularly easy to decipher, but it's best approached as the literal comedy of manners Buñuel intends it to be.

Albeit scattershot, Phantom does cohere as a satire of keeping up appearances in which everything is as it appears.

Much that has been hailed as Buñuel's profundity is merely self-purgation: catharsis for himself rather than for his audience. Though this may be the commonest motive for artistic creation, it is, by itself, insufficient.

The result is funny, frustrating and thought-provoking.

Made near the end of Buñuel's career, it's not his greatest movie, but it contains some of his most memorable moments.

Bunuel's most uninhibited venture though audacious and satisfying my Bunuel pangs, lacks a bite or enough charm to appeal to the masses.

"The Phantom of Liberty" (the penultimate work of director Luis Bunuel's amazing career) is a tricky film to get a handle on, because it's structured like a "Monty Python's Flying Circus" episode. Nothing but quirky vignettes and transitions, with no sense of overall narrative shape. A DVD interview with screenwriter Jean-Claude Carriere reveals the perverse concept was to follow a story that is abandoned just when it turns most interesting, and then switch to a less interesting story. Wow. Notable sequences span a missing child who isn't really missing, a visit with a sadomasochistic couple, a surreal night of insomnia and the strangest dinner-table scene you'll ever see. Other pieces will fade from memory as soon as the film ends. The cast is stuffed with European actors whose faces are more familiar than their names, including Monica Vitti, Michel Piccoli, Jean Rochefort, Michael Lonsdale and Adolfo Celi.

There is a LOT going on in this film! Bunuel takes "modern" society to task in an a very ammusing, slightly dark but always insightful manner. I found it very interesting and had a few good chuckles along the way. Not my favorite Bunuel film...but well worth a watch.

Buñuel's dark sense of humour can make us not only witnesses but supporters of this derision to all institutions that rule society. A concatenation of segments that adress tragedies, misbehavings and formalisms with the same farcical tone. Possibly inspired by 'The Saragossa manuscript' one of Buñuel's personal favourite films.

Buñuel's 1974 surrealist comedy is really a sequence of skits that mostly begin but never reach an ending, overlapping each other, completely without relation. All of them regard the different conventions and attitudes of society that Buñuel despised: he ridicules them, subverts them, and exposes them with a wit and an irreverence that are as shocking for their imagery as they are for their odd containment and elegance. I think this is probably the most wildly intelligent comedy I've ever seen, which is enhanced by the director's impeccable narrative style and the extensive first-rate cast. Definitely a must-watch for anyone looking to find the non-sense in what is usually considered logical, to be scandalized or to laugh for 2 hours straight.