Phantom of the Opera1925 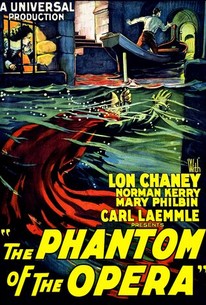 Critics Consensus: Decades later, it still retains its ability to scare -- and Lon Chaney's performance remains one of the benchmarks of the horror genre.

Critics Consensus: Decades later, it still retains its ability to scare -- and Lon Chaney's performance remains one of the benchmarks of the horror genre.

Critic Consensus: Decades later, it still retains its ability to scare -- and Lon Chaney's performance remains one of the benchmarks of the horror genre.

Phantom of the Opera Photos

Lon Chaney stars as Erik, the Phantom, in what is probably his most famous and certainly his most horrifying role. Produced by Universal, the film shot in 1923 and shelved for nearly two years, and was subjected to intensive studio tinkering. While many expected a disaster, the film turned out to be a rousing success. It was both the stepping off point for Chaney's run as a superstar at MGM and the prototype for the horror film cycle at Universal in the 1930s. The story concerns Erik, a much-feared fiend who haunts the Paris Opera House. Lurking around the damp, dank passages deep in the cellars of the theater, he secretly coaches understudy Christine Daae (Mary Philbin) to be an opera star. Through a startling sequence of terrors, including sending a giant chandelier crashing down on the opera patrons, the Phantom forces the lead soprano to withdraw from the opera, permitting Christine to step in. Luring Christine into his subterranean lair below the opera house, the Phantom confesses his love. But Christine is in love with Raoul de Chagny (Norman Kerry). The Phantom demands that Christine break off her relationship with Raoul before he'll allow her to return to the opera house stage. She agrees, but immediately upon her release from the Phantom's lair, she runs into the arms of Raoul and they plan to flee to England after her performance that night. The Phantom overhears their conversation and, during her performance, the Phantom kidnaps Christine, taking her to the depths of his dungeon. It is left to Raoul and Simon Buquet (Gibson Gowland), a secret service agent, to track down the Phantom and rescue Christine.

Lon Chaney
as The Phantom

George B. Williams
as Mons. Ricard

News & Interviews for Phantom of the Opera

View All Phantom of the Opera News

Critic Reviews for Phantom of the Opera

The atmosphere matches Chaney's performance perfectly. His grotesque appearance is achieved with wires, cotton balls, and eye-dilating chemicals, but his character, as usual, is animated from within.

Lon Chaney's performance as the hideous organist prowling the sewers beneath the Paris Opera is still a cornerstone of gothic horror.

A grand, pulpy potboiler of a suspense melodrama.

Though Mr. Chaney wears a more grotesque make-up than ever, the film play seems only pretty good.

Kerry is a colorless hero, Philbin contents herself with being pretty and becoming terrorized at the Phantom, and Chaney is either behind a mask or grimacing through his fiendish makeup.

[Phantom] is not nearly so magnificent in scale, nor so stirring in theme, as The Hunchback -- but as represented on the screen it is a more consistently thrilling story. It is spook melodrama at its wildest and weirdest, and it is beautifully done.

I see it and I am temporarily bored, I feel that it lacks dramatic expressiveness, although I recognize that it has aesthetic virtues that are undeniable when portraying gothic horror through atmospheres. [Full review in Spanish]

This is high-camp Hollywood hokum to be sure, but hokum dressed up to the nines. And arguably the sheer gorgeousness of the film, as well as Chaney's chill portrayal of the spectre, lend the entire endeavour an unexpected gravitas.

However, again the standout piece of the film remains to be Chaney. He appears maniacal from the word go, even as we're introduced to him as a silhouette.

Audience Reviews for Phantom of the Opera

Lon Chaney is so incredibly expressive that he makes the rest of the film's cast look lifeless in comparison. Along with the incredible make-up job, Chaney brings out the un-predictable behavior and confused nature of the title character. He was truly one of the quintessential silent actors. Not only is Chaney's turn as the Phantom incredibly memorable, the film's sets are also something to behold. The production value shows off the big budget that was spent on this movie, especially with sets like the ballroom, grand opera house, and the Phantom's dark dungeon. During the ballroom sequence the movie mysteriously turns into color for a brief time, which does a great job in highlighting the Phantoms red costume. A huge hit in its initial release, "The Phantom of the Opera" set the standard for other Universal horror flicks to come. The film may not be able to scare as much as it did back in 1925, but it still retains a fun chilling atmosphere throughout. A definitive silent horror classic.

Well, at least I can say I have seen the original now.

Remember that musical you grew up with that was made into a pretty good movie by a pretty bad director? This is that but without all the good music, pretty girls, or characteristic mask. I guess the reason this is considered a horror classic is Lon Chaney's ugly face; he's got a big, toothy sneer, and he moves like an animated skeleton. Maybe I've seen too many modern horror films in which the makeup effects are so advanced that they put the older stuff to shame, but no effect registered in me during Chaney's famous reveal scene. More to the point, the Andrew Lloyd Webber/Tim Rice version turns Christine's ultimate rejection of the Phantom into a question of the seduction of darkness versus the purity of Raoul's romantic affection, evidenced by the first lines of "All I Ask of You": "No more talk of darkness; forget these wide-eyed fears; I'm here." In this version, Raoul struts and prances like he's constantly posing for a bronze to be erected at the entrance of the theater, and his attachment to Christine is more about possession than affection. And I think we're to understand that The Phantom's ugly exterior is supposed to be evidence for an uglier interior that Christine discovers once she sees his face. Of course, it's true that The Phantom is truly unhinged, dropping chandeliers on people and drowning invaders of his underground hideaway, but Christine's judgment of his seems premature and superficial. Even though it's true that I rarely see hot women with men that ugly, as far as the story is concerned, Christine comes off as unlikable - to the film's detriment. Overall, this is a case in which the remake is much better than the classic.

This is the second Phantom movie I've seen the first was the 40s version, and I liked this movie a lot better. The story is clearer, the phantom is creepier, and it's more exciting. It does get to feel a little long towards the end, because it says it's only 70 some minutes, but the version I saw was over 100 minutes. At least in this one you don't have to listen to the opera singers. Overall, a really good movie, I enjoyed it.

Phantom of the Opera Quotes