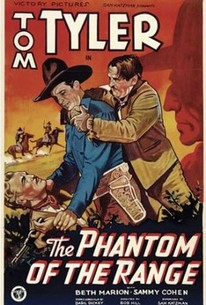 The Phantom of the Range Photos

Filmed back-to-back with Rip Roarin' Buckaroo, this low-budget Western starred the darkly handsome Tom Tyler as Jerry Lane, a drifter who comes to the aid of a beleaguered female would-be rancher. Arriving from Santa Fe to establish her claim to her late grandfather's property, Jeanne Moore (Beth Marion) finds the place apparently haunted by old Hiram Moore's ghost. It is all a ruse, of course, concocted by greedy neighbor Brandon (Forrest Taylor), who wants the old man's treasure -- a half-million dollars in gold hidden somewhere on the property. Jerry Lane outbids both Jeanne and Brandon at the auction, hires a cockney butler, Eddie (Sammy Cohen), and invites Jeanne to stay at the ranch. One of Brandon's accomplices, Perdita (Soledad Jiminez), infiltrates the household in the guise of a maid, but it is Eddie who finally locates the treasure, which a magnanimous Jerry insists rightfully belongs to Jeanne.

Soledad Jiminez
as Perdita the Housekeeper

Dick Cramer
as Sheriff
View All

Critic Reviews for The Phantom of the Range

There are no critic reviews yet for The Phantom of the Range. Keep checking Rotten Tomatoes for updates!

There are no featured reviews for The Phantom of the Range at this time.

The Phantom of the Range Quotes