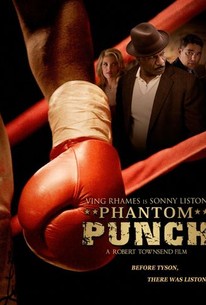 Cinematic heavyweight Ving Rhames steps into the boxing ring as controversial pugilist Sonny Liston in this sports biopic that begins as Liston realizes his talent for boxing as an inmate at a Missouri State Penitentiary, and follows his career to the moment it was effectively ended due to a devastating blow by powerful opponent Cassius Clay. Born into poverty, Liston was imprisoned as a teen for taking part in a gas station robbery, his skill for boxing uncovered by a Roman Catholic priest and helping the emerging athlete to secure an early release. Recurring bouts with racism, the mob, and the law ensured that Liston was never able to rest easy during his rise to become World Heavyweight Boxing Champion, with the notorious "phantom punch" delivered by Clay offering a painful capper to a turbulent career. Nicholas Turtutto, Bridgette Wilson-Sampras, and David Proval co-star.

Phantom Punch delivers some knock out scenes outside the ring as well as within it.

What a sordid tale of one of the most underrated and controversial heavyweight champions to ever step into the ring of boxing. Portrayed by the comedian Robert Townsend...this tale of his rise from impoverished youth to the heavyweight champion of the world was tarnished by the very connections that got him there in the first place...even to his demise there are still questions surrounding his untimely passing. See this it is full of surprises to those who can relate to what he has gone through!