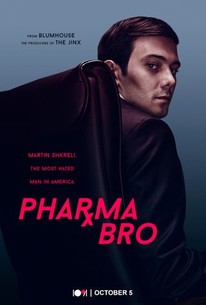 Martin Shkreli, the 38-year-old financial entrepreneur and pharmaceutical tycoon from Brooklyn, New York, was dubbed "the most hated man in America" by the media after he rose to infamy in 2015 for price gouging the prescription drug Daraprim by 5500% overnight depriving patients of the life-saving medication. That same year, Shkreli purchased the Wu-Tang Clan's single copy of "Once Upon a Time in Shaolin" for 2 million dollars, and was arrested for securities fraud, eventually resulting in the subsequent forfeiture of the album and recent reselling of it by the U.S. government to an anonymous buyer to pay off Shkreli's debt. He has gained notoriety for his unchecked online presence, which was ultimately his downfall and sent him to prison, where he continues to provoke the public with bombastic declarations about finding a cure for the virus which has upended the world, Covid-19.

There isn't enough in the film about the issue of drug pricing - but it says enough to underline the difference between us here in Canada, and our neighbours to the south.

Hodge is not always on Shkreli's side, but he appears convinced he's made a well-rounded portrait, as opposed to a dubious, bottom-feeding, bro-to-bro testimonial.

A bafflingly bad examination of recent scandal, which makes half-assed arguments that Martin Shkreli is worthy of re-examination or, for that matter, interesting at all (he's neither)

Pharma Bro tries to fulfill an impossible task, and ultimately doesn't add up to much. But a spinoff short doc about Billy the Fridge seems to be in order.

Pharma Bro tries to wrestle with that contradiction, though it doesn't get very far, because director Brent Hodge inserts himself so aggressively and unnecessarily into the narrative.

[The] film serves two purposes. Firstly, it documents neglected aspects of the Shkreli story for the record. Secondly, it explores something of the psychology of his remaining adherents.

Who knew such a reprehensible man could be fodder for such a phenomenal documentary?

The film touches on a lot of points but seems to pull back on going too deep. The result is a documentary that is interesting, but not as much as it should be.

This is a wild ride and a stellar example of our schadenfreude watching him go down.

A tale of price gouging galore.

There are no featured reviews for Pharma Bro at this time.