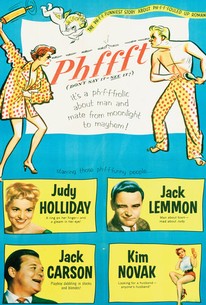 After several years of domestic squabbles, the marriage of Nina and Robert Tracy (Judy Holliday, Jack Lemmon) goes "phffft"! Upon receiving their divorce papers, Nina and Robert are certain that they'll remain friends, no matter how many new lovers they pick up along the way. Nina dallies briefly with bombastic Charlie Newton (Jack Carson), while Robert has a fling with the luscious Janis (Kim Novak). These romantic episodes only serve to make Nina and Robert realize how much they're still in love with each other. According to costar Jack Lemmon, the original title of this film was Phfffft!, but after an all-night bull session at Columbia Pictures it was decided to take out one of the "F"s. ~ Hal Erickson, Rovi

Holliday, famous for portraying ditzes of accidental genius, here plays someone like herself-a smart and worldly woman whose professional life requires her to dumb down.

Because some slang from the fifties was left in the fifties, I had no idea what the title of this film referred to until I saw it. It simply means divorce or a split up of a husband and wife. That's basically what the movie's about. It's a predictable story, but it's a hilarious movie with a great cast.

Good perfomances from good performers but the script is a nothing.