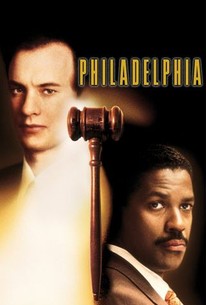 Critics Consensus: Philadelphia indulges in some unfortunate clichés in its quest to impart a meaningful message, but its stellar cast and sensitive direction are more than enough to compensate.

Critics Consensus: Philadelphia indulges in some unfortunate clichés in its quest to impart a meaningful message, but its stellar cast and sensitive direction are more than enough to compensate.

Critic Consensus: Philadelphia indulges in some unfortunate clichés in its quest to impart a meaningful message, but its stellar cast and sensitive direction are more than enough to compensate.

At the time of its release, Jonathan Demme's Philadelphia was the first big-budget Hollywood film to tackle the medical, political, and social issues of AIDS. Tom Hanks, in his first Academy Award-winning performance, plays Andrew Beckett, a talented lawyer at a stodgy Philadelphia law firm. The homosexual Andrew has contracted AIDS but fears informing his firm about the disease. The firm's senior partner, Charles Wheeler (Jason Robards), assigns Andrew a case involving their most important client. Andrew begins diligently working on the case, but soon the lesions associated with AIDS are visible on his face. Wheeler abruptly removes Andrew from the case and fires him from the firm. Andrew believes he has been fired because of his illness and plans to fight the firm in court. But because of the firm's reputation, no lawyer in Philadelphia will risk handling his case. In desperation, Andrew hires Joe Miller (Denzel Washington), a black lawyer who advertises on television, mainly handling personal injury cases. Miller dislikes homosexuals but agrees to take the case for the money and exposure. As Miller prepares for the courtroom battle against one of the law firm's key litigators, Belinda Conine (Mary Steenburgen), Miller begins to realize the discrimination practiced against Andrew is no different from the discrimination Miller himself has to battle against. The cast also includes Antonio Banderas as Andrew's partner, Joanne Woodward as Andrew's mother, and Stephanie Roth as Joe's wife. ~ Paul Brenner, Rovi

Andre B. Blake
as Young Man in Pharmacy

Julius "Dr. J" Erving
as Himself

James B. Howard
as Dexter Smith

Jim Roche
as `Not Adam and Steve'

Jordan Cael
as The Jury

Harry Northrup
as The Jury

Steve Vignari
as The Jury

Lawrence T. Wrentz
as The Jury

Philadelphia may not be the film Demme's fans expect--its emotionalism is unfiltered by cool. But it has the power to open more than a few blinkered hearts.

[An] extremely well-made message picture about tolerance, justice and discrimination is pitched at mainstream audiences, befitting its position as the first major Hollywood film to directly tackle the disease.

Safe and apolitical it may be, but Philadelphia succeeds as a deeply affecting humanist drama.

In the guise of piety, Philadelphia panders to a perceived straight-male majority.

"Philadelphia" mostly succeeds in being forceful, impassioned and moving, sometimes even rising to the full range of emotion that its subject warrants. But too often, even at its most assertive, it works in safely predictable ways.

Arguably, the horror of death from Aids has been sanitized for popular consumption, but nevertheless it is a brave and commendable effort.

Philadelphia is hardly a movie milestone, but it's actually quite limber for a film that has to carry such a heavy load on its shoulders.

Every actor's contribution to the film is noteworthy, especially when Demme chooses to bestir them with intrusive camera angles and lingering scenes of emotional poignancy.

Filmmaker Jonathan Demme does an absolutely superlative job of establishing the film's various characters and their urban environs...

An important film not just from a cinematic perspective, but from a cultural one, bringing the AIDS crisis to the masses in a deeply human way, confronting and dispelling prejudices and misconceptions with major stars.

Hanks and Washington (in a role that's unexpectedly comic) have rarely been better and use their considerable star power to obscure some of the movie's flaws.

Philadelphia, apart from having talented actors delivering remarkable performances, is a piece of history that anyone with a heart and a sense of justice can understand.

One of the first movies to deal with delicate matters like AIDS, homosexuality and intolerance at the time of its release. Although not altogether memorable, this is a praise-worthy effort that relies on some great performances and proves to be a deeply touching experience.

Philadelphia is heartfelt and well-performed despite the simple plot. Tom Hanks & Denzel Washington provide remarkable charisma and chemistry in this film along with a creative direction from Jonathan Demme, making this piece an underrated film of the 90s. 4/5

Upon its release, this was a very important and groundbreaking film since it was the first major Hollywood effort to deal with the medical, social, and political issues of AIDS. The story revolves around lawyer Andrew Beckett who is fired (he is told) for incompetence. He thinks the real reasons he is fired is because he is gay, but more importantly, because he is dying of AIDS. He feels an injustice has been done, so he teams up with an ACLU lawyer to take his former employers to court. Tom Hanks won his first of two consecutive Oscars with this role as Andy Beckett, and yeah, he is wonderful. He gives a moving and sensitive performance- really highlighting what it is like to experience the stigmas surrounding the AIDS virus, especially at that time. As his lawyer, Denzel Washington is also top notch. I like how Washington's Joe Miller openly admits his dislike of homosexuals, but comes around when he realizes that Beckett really was unjustly let go. The film's primarily a courtroom drama, but it's not nearly as gripping as something like A Few Good Men. I appreciate the way the film handles the subject matter, but I can't help but feel it gets a bit too heavy handed, preachy, and pretentious at times, though thankfully it's largely nuanced for a lot of it. If going solely by the acting, this would get at least 4.5 stars, but as an overall experience I think 4 is pretty fair. It is an important work, but I think it's a bit rough around the edges, being groundbreaking and whatnot. All in all though, I do recommend it, because it is very affecting and touching.

Hanks and Washington shine. This was a great movie and it came out at the right time.