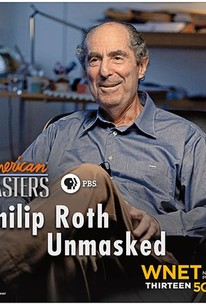 Philip Roth, arguably America's greatest living novelist, turns 80 on March 19. In 1959, his collection of short stories, Goodbye, Columbus, put him on the map, and 10 years later his hilarious, ribald best-seller, Portnoy's Complaint, gave rise to the first of many Roth-related controversies in which Judaism, sex, the role of women, and the parent-child relationship would take center stage. In candid interviews, the Pulitzer Prize-winner discusses his distinctly unliterary upbringing in Newark, NJ, his admiration for Saul Bellow and Bernard Malamud, his "brutal and lurid" first marriage, and how Zuckerman may or may not be his alter-ego. Nathan Englander, Mia Farrow, Jonathan Franzen, and Martin Garbus are among those who talk about the man and his writing. Franzen in particular praises Roth for "how brave he must have been to have methodically offended everybody and to have exposed parts of himself no one had ever exposed before."

It's great to see extensive interview footage with the relaxed and funny author, but Philip Roth: Unmasked shies away from controversy and, as a result, feels a bit sanitized.

That neither Krauss nor anyone has anything remotely unflattering to say about the subject points to the fundamental dishonesty of the work, which extends from its excessive reverence.

It's good that Philip Roth finally let others in during the waning years of an extraordinary writing life.

Frustratingly little light is shed on either Roth's life or his work by this series of interviews with the novelist and a curious selection of admirers.

For some 90 minutes, it's pretty much just one guy talking. But what a guy!

This dully conventional biography doesn't do justice to its subject.

Admiring if less than revealing documentary about one of the great writers of our time.

Why would Roth give himself over to filmmakers who'd make a movie as dull and superficial as this one?..Makes you long for the doc that could be made by a real filmmaker

Sticking to what's on the page pays off, especially with regard to Roth's undervalued late novels, but also means he has [the filmmakers] just where he wants them.

Philip Roth may be unmasked but is only partially revealed in this very personable documentary portrait of one of the leading American literary figures of the past half-century.

In spite of the film's exhaustive chronology, those who deduce from its title that they're in for an unveiling, or an unraveling, of a major literary figure may come out empty-handed.

Roth was dashing, charming, a little dangerous, one of his college friends tells us, but she doesn't need to say it. It's manifest, and it's still true.

There are no featured reviews for Philip Roth: Unmasked at this time.