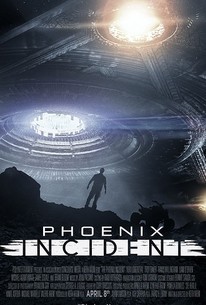 On March 13, 1997 thousands of people claimed to have simultaneously witnessed unexplainable lights in the Phoenix, Arizona night sky. What were the lights? To this day it remains a mystery and footage of the incidents has been used in documentaries on the subject of UFOs. The Phoenix Incident is a fictionalized heart-pounding thriller based on this real-life event. Written and directed by gaming talent director Keith Arem (Call of Duty, Titanfall) and starring Troy Baker (famed gaming actor) this one-night event uses whistleblower testimony, recovered military footage and eyewitness accounts to create a sci-fi thriller that examines the US military's alleged engagement of alien spacecrafts. In addition to being able to experience this exciting film, event attendees will be exposed to an exclusive 5-minute documentary about UFO sightings and government cover ups and a special panel discussion previously captured at this year's UFO congress.

The doc-style found-footage approach, which almost feels like a true-crime network news magazine show at times, is a smart approach to a lower-budget sci-fi film, seamlessly weaving together fact and fiction.

Ultimately, The Phoenix Incident is more impressive for its ingenious publicity and marketing campaigns, including fake web news sites that went viral, than the quality of the filmmaking.

"The Phoenix Incident" is an indigestible mess.

The Phoenix Incident is a thought-provoking and frightening account of an already scary event.

There are some good monster moments that, with more build up, would have been startling. We want to see more action, we don't want to read about it or hear people talk about it.

An uninspired and uninspiring attempt to capitalize on the fact there are people out there who will believe anything.

[Director] Arem's science fiction thriller is not a masterpiece, but it manages to end as a solid genre entry...

There are no featured audience reviews yet. Click the link below to see what others say about Phoenix Incident!