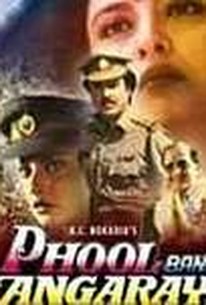 Political intrigue and murder mix when corrupt gangster Bishamber Prasad (Prem Chopra) runs for office and kills his opponent, Dutta Babu (Parikshat Sahni). Astute cop Ranjit Singh (Rajnikanth) suspects Prasad but is thwarted from closing the case. Unwilling to let go, Singh continues to pursue Prasad over the years and eventually winds up dead. Now, it's up to his wife, Namrata (Rekha), to seek justice in this Bollywood thriller.

There are no critic reviews yet for Phool Bane Angaray. Keep checking Rotten Tomatoes for updates!

There are no featured reviews for Phool Bane Angaray at this time.